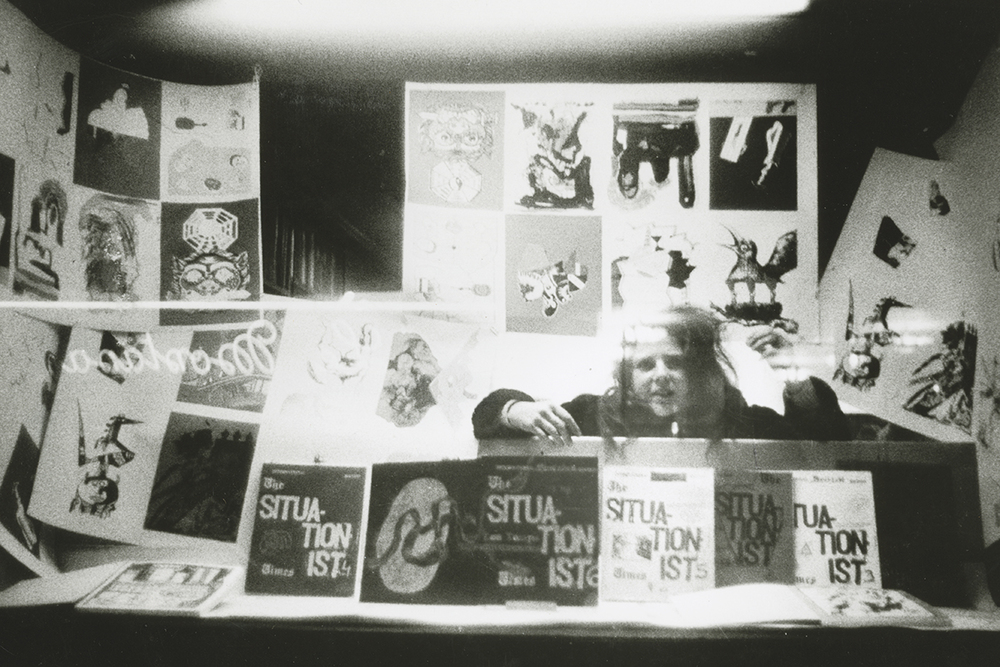 I exult, I’m delighted, in the company of angels.

You are the Goddess of the Situation.  – Noël Arnaud to Jacqueline de Jong, upon receiving copies of the first issue of The Situationist Times, May 8, 1962

Jacqueline de Jong: The Situationist Times 1962-1967” was an exhibition of original art, publications, photography, ephemera and manuscripts related to de Jong’s vanguard publication The Situationist Times, celebrating the 50th anniversary of its first issue. A total of six issues were published: Issue 1 in May of 1962, and the final issue in December of 1967. A seventh issue was compiled but not published. The Situationist movement produced periodicals: Internationale Situationniste (twelve issues published between 1958 and 1969) and the German Gruppe SPUR publication SPUR (six issues from August 1960 to August 1961). There were other examples:Drakabygget (Scandinavia), Heatwave (UK), Black Mask (USA), King Mob Echo (UK).

De Jong was determined to produce “a completely free magazine, based on the most creative of the Situationist ideas.”

The archival materials, issues and artwork relating to the six issues of The Situationist Times are an absolutely extraordinary marriage of raging political polemic and superb and explosive visual art by masters such as De Jong, Asger Jorn, Pierre Alechinsky, and Gruppe SPUR at the top of their game.

The first two issues of The Situationist Times were co-edited by Noël Arnaud, the legendary editor of the solitary issue of Surrealiste Revolutionnaire. He was initially introduced to De Jong by her partner Jorn, who had worked with Arnaud in the College of Pataphysics and within the realm of the Cobra art group. The second issue saw the first experiments with typography and multiple colored paper stocks. Issue 3 was the first issue produced with De Jong solely at the helm. Her powerful and idiosyncratic editorial style helped shape a magazine where the contributors ranged from architects (Aldo Van Eyck, David Georges Emmerich) to an art historian (Hans Jaffe) to astrophysicists (Jayant Narlikar, Fred Hoyle) to a composer of opera (Peter Schat).

As the publication went on, the emphasis became more and more visual (Issue 3 had “situlogical” patterns such as knots and spirals as its theme, Issue 4 had labyrinths, Issue 5 featured topology). For Issue 6, de Jong collected material on circles for almost two years, until, inspired by Walasse Ting’s and Sam Francis’ publication One Cent Life, de Jong decided to create a salon-exhibition-style issue of The Situationist Times, featuring 33 artists who each contributed a lithograph (the motive was to raise money for subsequent issues). Issue 6 was launched in the Spring of 1967 with two exhibitions in Paris at the book shops La Hune and Le Divan. Due to a catastrophic legal and financial battle with the distributor of Issue 6, the publication of The Situationist Times came to an end.

In 1970, Jacqueline de Jong broke up with Jorn, who was 25 years her senior. De Jong participated in the student uprising in Paris in May of 1968, contributing posters of exceptional potency, beauty and vibrancy. Subsequently she moved away from revolutionary activities and has remained active as a superb painter, sculptor, jeweler and gardener, regularly exhibiting in Holland and internationally.