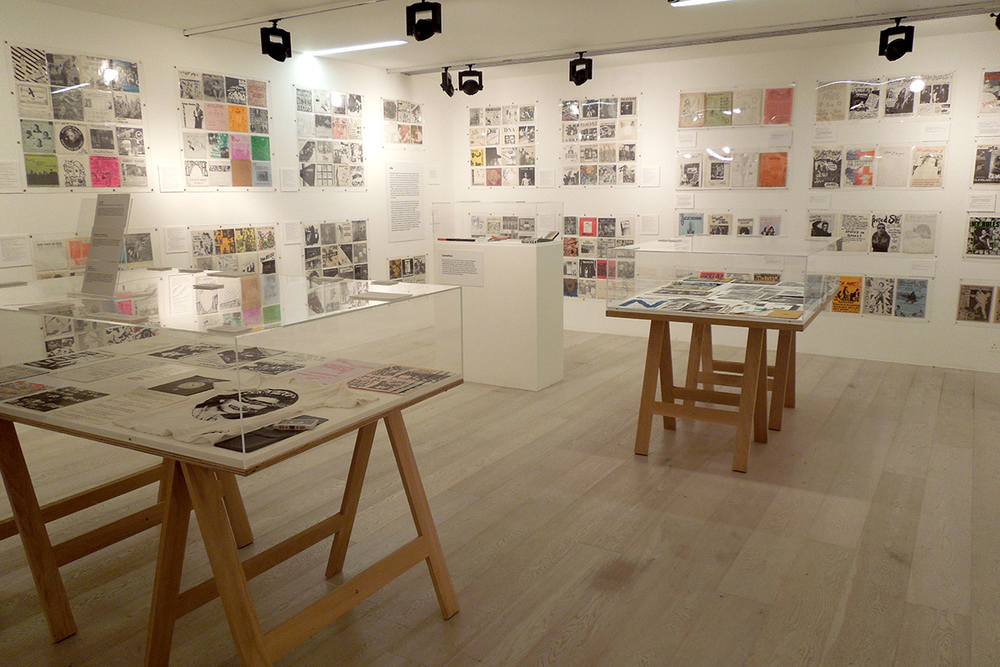 If you don’t like the culture you are spoon-fed, you can make your own. It worked wonders at the end of the seventies, and all these jagged, chiaroscuro urgent masterpieces of graphic design, executed by art school masters alongside anguished adolescents continue to reverberate as get-up-and-get-on-with-it eyeball-pleasers.  – Johan Kugelberg, co-curator

Works presented in “Someday All the Adults Will Die: Punk Graphics 1971 – 1984” included clothing designed by Vivienne Westwood and Malcolm McLaren; early press releases and pamphlets for the Sex Pistols and the Ramones; publications and early fanzines including London’s Outrage, Punk, Sniffin’ Glue, and Suburban Press; a rare chance to see and hear a collection of DIY 7” records from international punk labels and artists of the period; situationist-informed prints produced at art school by Malcolm McLaren; limited edition Black Flag prints from the early 1980s by Raymond Pettibon; a Linder Sterling flyer for a 1978 Joy Division performance in Manchester; and six banners used to advertise The Great Rock ‘n’ Roll Swindle, a 1980 ‘documentary’ film about the Sex Pistols, designed by Jamie Reid – whose cut-and-paste aesthetic became synonymous with the graphic imagery of the punk movement, particularly in the UK.

The exhibit was curated by Johan Kugelberg of Boo-Hooray, and Jon Savage, journalist and the author of England’s Dreaming: Sex Pistols and Punk Rock and Teenage: The Creation of Youth Culture, among many other books.

There was a panel discussion moderated by Johan Kugelberg on September 13, 2012. The panel discussion at the Purcell Room, Southbank Centre explored the provocative graphic art that developed alongside punk rock. Panelists included Tony Drayton, editor ofRipped & Torn, one of the first UK punk fanzines, and Kill Your Pet Puppy – arguably one of the most aesthetically interesting anarcho-punk fanzines of the 80s; William Gibson, award winning writer and seminal cyberpunk novelist; John Holmstrom, writer, cartoonist and legendary editor of the iconic Punk Magazine; and artist Gee Vaucher, whose record covers and newsletters for anarcho-punk band Crass in the late 1970s and early 80s influenced graphics for political protest as well as for music.

The exhibition coincided with the publication of Punk: An Aesthetic by Johan Kugelberg and Jon Savage, published by Rizzoli.