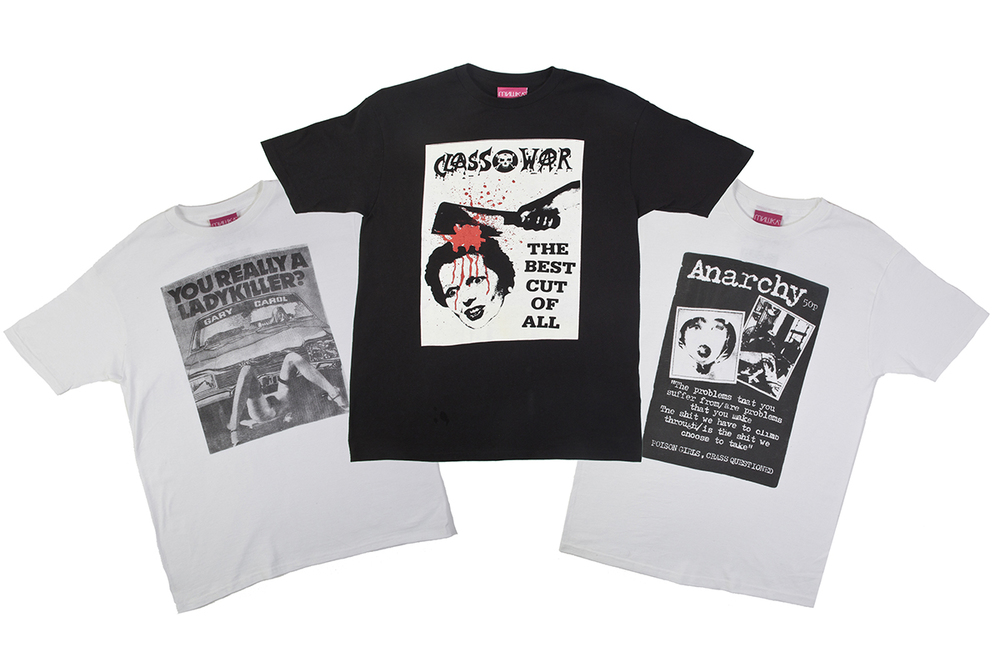 These ultra-potent examples of grassroots activist thoughts and emotions are demonstrations of micro-historical everyday life, narratives of anti-autocratic discourse. They are of immense importance as sources of inspiration to action. What could these people have accomplished with the tools at hand in 2014?  —Johan Kugelberg

In January 2014, Boo-Hooray and Mishka celebrated anarcho-punk group Crass and their Dial House’s shared legacy by presenting an exhibition of fanzines and ephemera from the Crass/Dial House archive.

Crass’ art and poetry exist in the message, and the fearless expression of it without peer or compromise. Their influence on the lives of misfits, belongers, winners, losers, straights, and visionaries across the globe reverberates to this day.

In the mid-1980s Penny Rimbaud, poet, philosopher, and musician, purchased Dial House, which opened as a creative center in the late 1960s, to preserve its presence and legacy. The materials on exhibit were sent or given to Crass at Dial House during the years 1976 to 1984, from all over the world. This archive also includes later publications mailed to Dial House during the 1980s and 1990s. “In All Our Decadence People Die” illustrates and demonstrates the immediacy and potency of these grassroots activist punk artworks from an era that was pre-computer and, in some cases, pre-Xerox.

A short history of the Fanzines and their presence among us: Unlike Mr. Penny Rimbaud, I dislike throwing anything away. Placed in a cupboard at Dial House where no one ever looked, the fanzines survived Guy Fawkes’ night for nearly 30 years, taking a short break in a friend’s attic when the cupboard was, for some reason, requisitioned for party hats, old suitcases, and toys Finally brought home again, they went back into the cupboard away from the attention of Rimbaud and his persistent chanting of “let’s just bung it all on the fire.” Now, having finally left home for good, the collection parades itself brazenly and proudly before you and in very safe hands.  –Gee Vaucher

An exclusive line of Mishka t-shirts debuted at the event. Copies of the Boo-Hooray exhibition catalog, In All Our Decadence People Die: Crass-Era Fanzines 1976-1984 were offered which included the 7” vinyl record Not Them/Not Us, featuring music and poetry by Crass drummer/lyricist Penny Rimbaud.