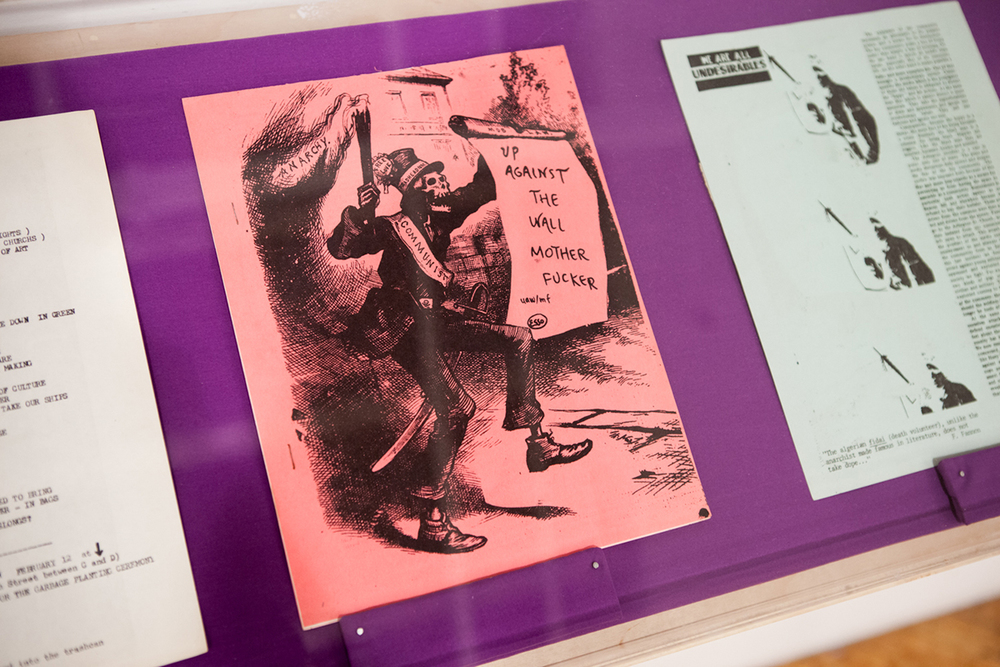 It’s good to learn about Ben Morea, to further inspire you and instruct you but – what you’re doing, a story now or a collaboration with Ben Morea – it’s not to make Ben Morea famous. It is to deepen the revolutionary potential that he puts out into people […]. Ben Morea’s work exemplifies a bolder activism. Putting yourself in the middle of the situation. Of feeling, “I’m responsible,” and I think he was exemplary in that kind of immediate here and now commitment. And he’d say, “I’m making the revolution now, here.” And that’s a beautiful and inspiring attitude.  —Judith Malina, The Living Theatre, 2013

Largely unknown by choice, Ben Morea is the force behind the 1960s art/anarchist collectives Up Against the Wall Motherfucker and the International Werewolf Conspiracy, and the legendary anarchist zine/broadside Black Mask. This was the first exhibition dedicated to a life work that intersected the underground press, rock and roll, performance art, experimental theater, and radical politics. Ben is one of our favorite people in the whole world.

Considering the ramifications and reverberations of Ben’s work, it is pretty surprising how obscure he has managed to remain. Most historical 60s narratives glaze over his 1966/1967 publication Black Mask, and describe UAW/MF as a cartoon-villain version of the Yippies or the Diggers, notwithstanding their bravery, and the devotion to community activism and social outreach alongside their militancy.

Morea co-founded the broadsheet/zine Black Mask with Ron Hahne in 1966. It was sold in the streets of the East Village and the Lower East Side for a nickel. Ben realized that if people were handed it for free they’d just toss it, the five cents were a filter where only people who actually cared would snag a copy. It is an extraordinary publication, bringing together seemingly disparate strands of radical thought in art, politics and everyday life.

Black Mask co-existed for the next few years with acts of rebellion, pranks and social activism generated within Ben Morea’s circles. He coined the phrase “affinity groups” to describe these circles, a term in general usage among anarchists and activists to this day.

Using the monikers Up Against the Wall Motherfuckers, International Werewolf Conspiracy, and (internally) the Family (no connection or affiliation with the west coast hippie cult), events that managed to simultaneously be spontaneous and well thought out, funny and thought-provoking, revolutionary and community-oriented were realized.

Accounts of these events and many more can be read about in detail in Ben Morea’s exemplary interview with Iain McIntyre at libcom.org.

A lot of people came through New York and spent time with this circle: the UK Situationists that went on to form King Mob, members of the Japanese radical student group Zenga-kuren, and also members of the Dutch Provos. All groups that Ben felt overlapped in approach with his affinity group.

His 1969 departure from New York City and subsequent life unobserved could fill another book or two: powerful and grounded work with Native American tribes, traditions, and children. Sufficient to say dozens of kids who would otherwise have grown up in orphanages refer to Ben as their grandfather, and tribes across our nation who had lost track of some of their own rituals and ceremonies have had them reintroduced through Ben.

Boo-Hooray published Opposition: Black Mask, Ben Morea, & U.A.W.M.F., a three-color risograph catalog of Ben Morea’s art, writings, and publications. Opposition was produced in an edition of 300 with silkscreen covers. It includes a text insert featuring an introduction by Johan Kugelberg and an autobiographical text by Ben Morea.