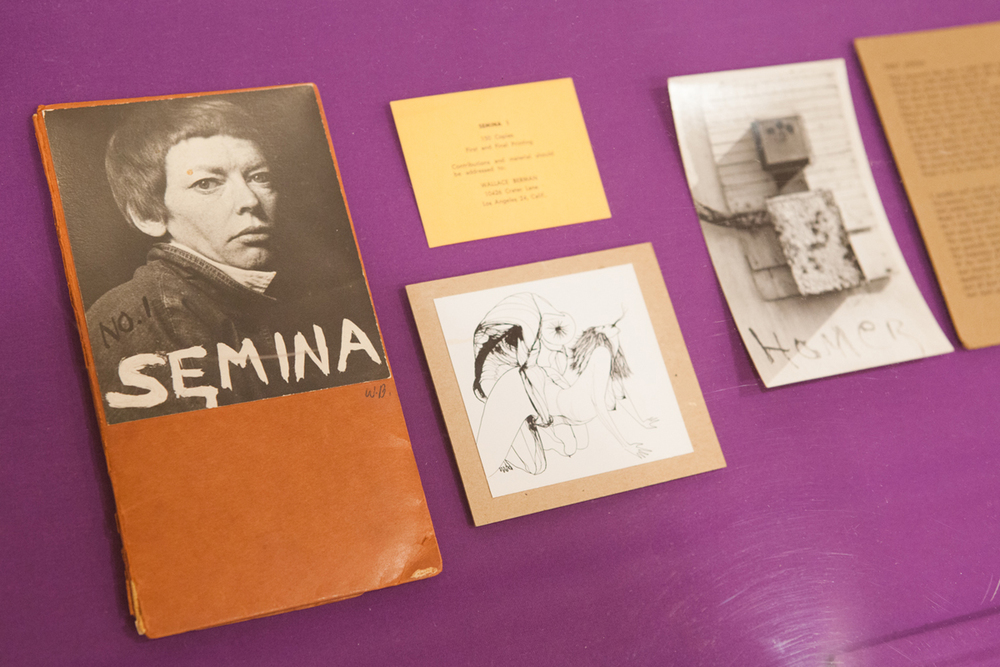 Michael McClure called Semina “a scrapbook of the spirit.” Outside of commerce, it was sent through the mail to Wallace Berman’s friends like David Meltzer, William S. Burroughs, Alexander Trocchi, Allen Ginsberg, and Cameron. The components of Semina were not only submitted, but appropriated from these friends, alongside personal heroes like W. B. Yeats, Hermann Hesse, and Antonin Artaud.

Hand-printed on a table-top at his house, this free-form zine with its loose-leaf poetry and amazing collages, montages and photography, is also most baffling in its vanguard status: nobody had done anything like this before Berman, not even in the days of Dada.

Published between 1955 and 1964 in editions ranging from 150 to 350 copies, this rare publication (original issues regularly sell in the five figures) needs to be seen and cherished by anyone interested in American post-war art.

Michael Duncan points out that “Semina’s overarching theme involved a search for how to transcend the ‘monster’ of postwar meaninglessness.”

The spirit of Semina’s assemblage will feel familiar to anybody who has ever stayed up late at night at a copy shop making a punk zine or flyer. The hypnotic and delicious feel of perusing the poetry and imagery is the closest I’ve gotten to capturing those fleeting moments when one remembers components of a distant dream.

Boo-Hooray published Semina 1955-1964 Art Is Love Is God, a 174 page softbound full-color catalogue reproducing each component of each issue of Semina. The catalog comes with a booklet of annotations and texts by Johan Kugelberg, Adam Davis, Tosh Berman, Shirley Berman, Philip Aarons and Andrew Roth. A deluxe edition also includes silkscreened artwork, photo prints, flyers and cards, all printed loose-leaf and contained in a pocket on the back board of the catalogue in the spirit of Wallace Berman’s original publication.