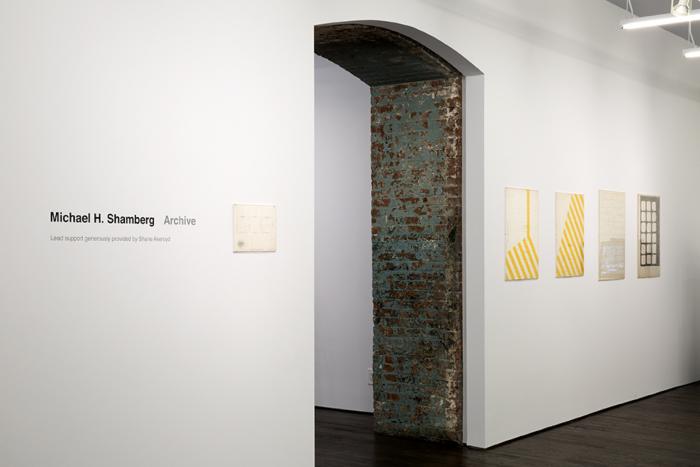 White Columns is proud to present ‘Michael H. Shamberg / Archive’, one of the two inaugural exhibitions at the gallery’s new location at 91 Horatio Street: in the heart of New York’s Meat Packing District, where White Columns has been based for the past twenty years.
This is the first exhibition dedicated to the life and work of the artist, filmmaker, and video producer Michael H. Shamberg (1952-2014.) Drawn exclusively from Shamberg’s archives the exhibition takes the form of a ‘portrait’, albeit an incomplete one, of a visionary individual whose revolutionary thinking – about art, film, and music - changed the course of popular culture.

Michael Shamberg was born in New York in 1952, and grew up in suburban Baltimore. He studied at Villanova University and at the Pennsylvania Academy of Fine Arts. In the mid 1970s he moved back to New York, where he worked at The Kitchen as a video assistant. Shamberg’s drawings and notebooks from this time reflect his interest in post-minimalism and site-related installation work. From 1976 onwards Shamberg’s interest in New York’s shifting downtown music scene becomes more apparent, evidenced in his interest in the work of the then recently-formed Talking Heads. In 1980 Shamberg began work on ‘Tribeca’, a short film shot in New York with the Manchester-based post-punk group A Certain Ratio. It was through making ‘Tribeca’ that Shamberg first came into contact with New Order (who has only recently formed, following the death of Joy Division’s singer Ian Curtis). This meeting would initiate a friendship and working partnership with New Order that would last until Shamberg’s death in 2014. Working effectively as New Order’s de facto ‘creative director’ in the United States Shamberg was responsible for commissioning the many artists and filmmakers who would collaborate on projects with the band, inc. John Baldessari, Kathryn Bigelow, Jonathan Demme, Robert Frank, Barbara Kruger, Robert Longo, William Wegman and Robert Breer, and Lawrence Weiner among others. From the early 1980s Shamberg also ran Factory Records U.S. operations from offices above White Columns gallery at 325 Spring Street, whilst working simultaneously as a film and video producer and director for artists, musicians, and filmmakers including Beth B., Lawrence Weiner, Grace Jones, R.E.M., Dan Graham, Patti Smith, and The B-52’s, among many others. Shamberg’s first feature film ‘Souvenir‘, which took more than five years to complete, was released to critical acclaim in 1999. In the early 2000s Shamberg contracted a progressive neurological disease that would ultimately shape the last decade of his life. During this time Shamberg created ‘Turtle’, an open-ended series of “anarchic salons” held in the U.K., France, Germany and beyond. At London’s Chelsea Space in 2006 ‘Turtle’ was announced as “an open and chaotic network of diverse but interconnecting ideas, people, projects, events, and venues linked by American filmmaker Michael H. Shamberg.”

The spirt of generosity and the notion of “interconnectedness” that was inherent to the ‘Turtle’ salons, is central to both Shamberg’s vison and his work. Long before such collaborations became the norm, Shamberg was making connections and encouraging collaborations between practitioners from the art, film and music communities: bringing people together from different creative fields to initiate innovative and unexpected work that remains pertinent to this day. (By way of an example, go to YouTube to watch Jonathan Demme’s 1985 “nine minute feature film” for New Order’s song ‘The Perfect Kiss.”)

Writing about Shamberg in the catalog for the 2017 exhibition ‘True Faith’ (that considered the ongoing cultural legacy of Joy Division and New Order) the archivist and curator Johan Kugelberg said:

“I would not dream of using a cliché like ‘Renaissance Man’ usually, but Michael H. Shamberg’s understanding of visual art, his taste, his aesthetic impulse, his hipness, is staggering. His trajectory from art school to his work as a filmmaker is often shocking in its forward-thinking. … I sometimes use the term ‘human link document’ to describe the brilliant people who act as catalysts of history: visionaries who have the ability to link artists from different disciplines, who can assemble events, performances and narratives that become much greater than the sum of their parts, and who can use their aesthetic impulses to advance the work of others, due to their inherent understanding of how both inspiration and execution works. Michael H. Shamberg is probably the best example of this that I have come across.”

‘Michael H. Shamberg / Archive’ has been organized by White Columns’ director Matthew Higgs and archivist, curator and Boo-Hooray founder Johan Kugelberg (neither of whom met Shamberg.) The materials in the exhibition have been drawn exclusively from Michael H. Shamberg’s archives. Our hope is that the exhibition will prompt a wider consideration and further exploration of Shamberg’s visionary work as a catalyst, artist, filmmaker, and cultural producer.

Lead support for ‘Michael H. Shamberg / Archive’ has been generously provided by Shane Akeroyd. We would also like to acknowledge the following people for their enthusiasm, support and assistance with this project: New Order, Rebecca Boulton, E.P. Richardson, Carol Wertheimer, Peter Saville, Peter Hook, Frank Wates, the staff of White Columns, the staff of Boo-Hooray, and all of the participating artists, musicians, photographers, and filmmakers.

Boo-Hooray has published a limited-edition ‘zine - drawn from materials in Shamberg’s archives - to accompany the exhibition. Funds from the sale of the publication will support White Columns’ programs.