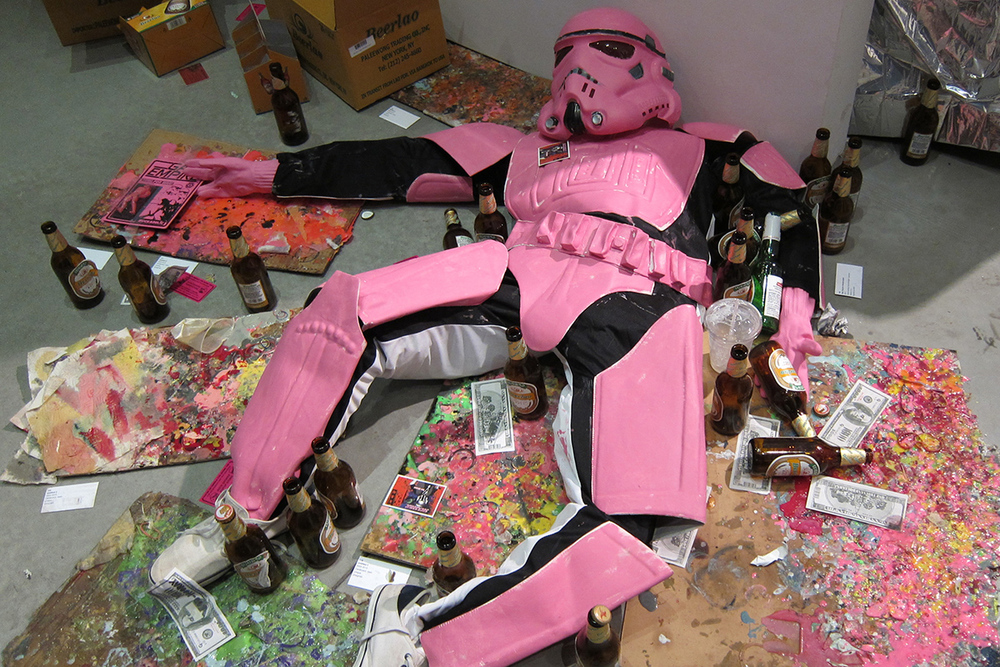 The work presented in this exhibit is a documentation of my struggle to reach the top of a sinister pyramid scheme; a culture-jacking enterprise where ruthless-yet-compelling super-criminals compete for the imaginations of fickle consumers and a relentless media machine.  – Excerpt from the Sucklord’s artist statement

In 2011, Boo-Hooray reluctantly announced the first Suckadelic retrospective gallery exhibition, “You’re An Asshole For Buying This.” The art-toys of Suckadelic are intentionally confusing, misleading, disappointing and really funny. The pieces are limited edition parodies of action figures that reverberate with a vicious wit and are oddly eyeball-pleasing in the manner of all kinds of toothsome 20th/21st century collage and montage art.

The art of Suckadelic is produced by the Sucklord. Their aggressively situationist piss-take packaging comment on pop culture commodification and the consumer habits of compulsively shopping kidults: The very process that made KAWS, Takashi Murakami, and Michael Lau art-stars on the Art Basel Miami/Armory Show/Venice Biennale tip.

One of the most respected despised and influential figures in the art toy movement for the past decade, the Sucklord has been producing handmade bootleg action figures in very limited runs, each selling out immediately. As the plot thickens, the work of the Sucklord is widely collected in fine art circles, and has been auctioned at Christie’s, Freeman’s and Phillips.

This exhibition marked the first time the entire Suckadelic catalogue was exhibited in one place. For the duration of the exhibit, a Suckadelic Suck-Shoppe pop-up store was open. Original artwork, sculptures, silk-screens and paintings were also for sale. If you showed up on opening night, you had the opportunity to meet the characters from the Suckadelic universe.

For the Closing Sausage Party, the Sucklord presented his new performance art piece, “The Sucklord is Present,” a 3-hour static, silent piece, in which he sat immobile, while spectators were invited to take turns sitting opposite him. Suckadelic Supervillans Vectar, Gay Homotrooper, Mary Paper$, and Another Bitch were on hand selling signed headshots for $UCKBUX. $UCKBUX could be earned at the party, as Boo-Hooray Gallery was happy to pay you $UCKBUX for your SUCKADELIC fan artwork. You could bring your pieces, or make them at our SUCKADELIC crafting table.