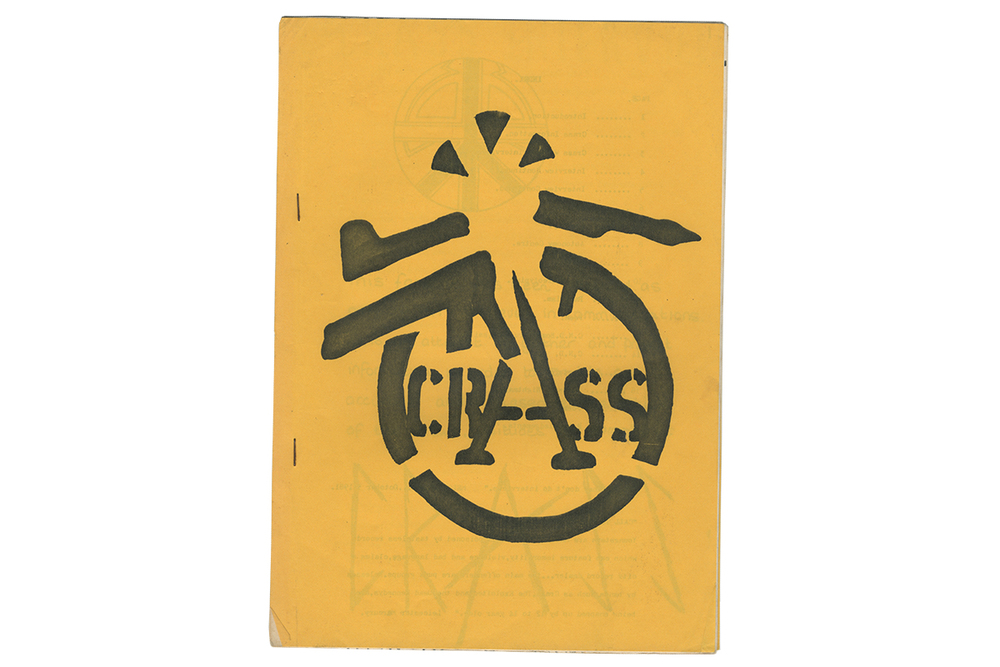 “In All Our Decadence People Die” is an exhibition of fanzines and ephemera collected at Dial House, home to the English anarchist punk band Crass, active from 1977-1984. The public and private political stance of Crass was without peer or compromise. Their influence on the lives of misfits, belongers, winners, losers, straights and visionaries across the globe reverberates to this day.

Dial House has been running as a creative center since the late 1960s and was instigated by the poet, philosopher, and Crass drummer/lyricist, Penny Rimbaud. The Crass/Dial House fanzine archive, saved by Gee Vaucher, consists of approximately 3000 fanzines, broadsides, pamphlets and flyers, as well as posters, manuscript and original artwork. The materials were sent or given to the anarcho-punk group Crass during the years 1977 to 1984 from all over the world. The archive also includes later publications mailed to Dial House during the 1980s and 1990s. The show illustrates and demonstrates the immediacy and potency of these grassroots activist punk artworks from an era which was pre-computer and, in some cases, pre-xerox. In addition, related original artworks by Gee from her ground-breaking “nihilist newspaper for the living,” International Anthem, were also included.

A short history of the Fanzines and their presence amongst us: Unlike Mr Penny Rimbaud, I dislike throwing anything away. Placed in a cupboard at Dial House where no one ever looked, the fanzines survived Guy Fawkes night for nearly 30 years, taking a short break in a friends attic when the cupboard was, for some reason, requisitioned for party hats, old suitcases and toys. Finally brought home again, they went back into the cupboard, away from the attention of Rimbaud and his persistent chanting of “let’s just bung it all on the fire.” Now, having finally left home for good, the collection parades itself brazenly and proudly before you and in very safe hands.  – Gee Vaucher

Johan Kugelberg, hosted a talk with Gee Vaucher on October 1, 2011. They discussed International Anthem, her more recent publications and the ongoing activities of her newly-reformed Exitstencil Press. This was followed by a screening of Semi Detached: the Films of Gee Vaucher 1978-1984. Semi-Detachedwas also screened throughout the exhibition. The exhibit also included a new audio installation of Penny Rimbaud’s work.

Boo-Hooray published the exhibition catalog, In All Our Decadence People Die, in an edition of 250 copies. It has since gone through three editions. In collaboration with Exitstencil Press, Boo-Hooray also published Not Them/Not Us, a 7” vinyl record by Penny Rimbaud and Louise Elliott with cover art by Gee Vaucher, in an edition of 500 copies.