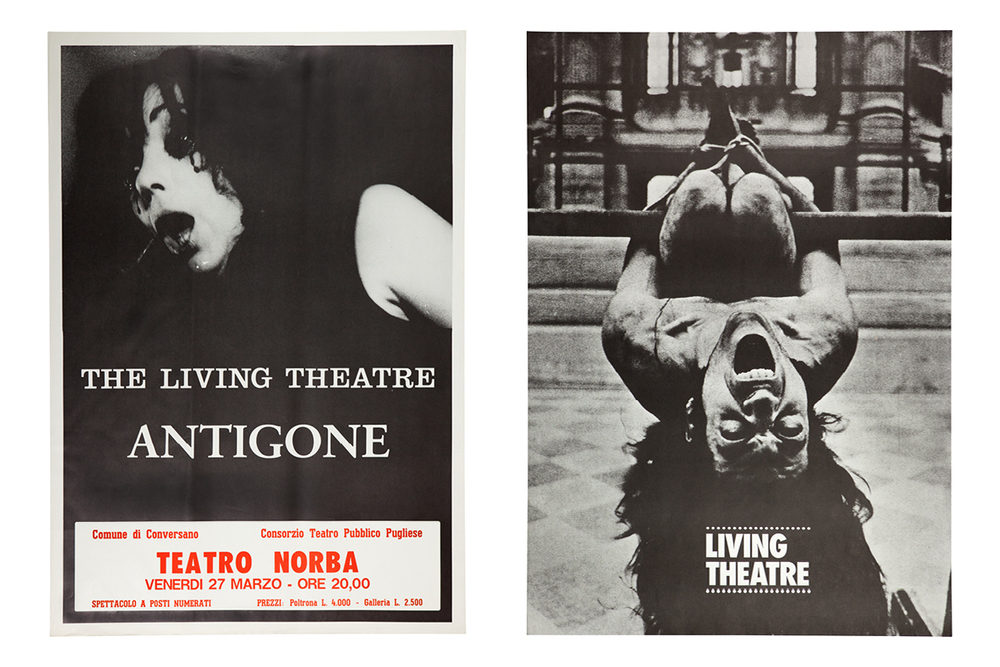 Boo-Hooray and Gavin Brown’s enterprise are pleased to present an exhibition of posters, photographs and ephemera from the Living Theatre archive, staged as a living collage by Spencer Sweeney, Lizzi Bougatsos, and Johan Kugelberg. Beautiful printed works will be collaged on the walls of Gavin Brown’s Grand Street gallery, celebrating and communicating the amazing journey of arguably the defining post-war experimental theatre group in America.

The Living Theatre was founded in 1947 by actress Judith Malina (1926-2015) and poet/painter Julian Beck (1925-1985). The Living Theatre drew its inspiration from Antonin Artaud’s Theatre of Cruelty and sought to inspire political dissidence using theatre that engaged the audience through direct spectacle. They were pioneers of the avant-garde as it happened in America, working regularly with such notable collaborators as Allen Ginsberg, John Cage, Claes Oldenburg, Maya Deren, Walter de Maria, Ray Johnson, Jonas Mekas, Kenneth Anger, John Ashbery, and William Carlos Williams among others.

In the 1950s and early 60s, The Living Theatre staged plays by Jean Cocteau, Pablo Picasso, and T.S. Eliot, as well as Bertolt Brecht’s In The Jungle of The Cities, and The Brig by former marine, Kenneth H. Brown. In 1959 the group staged the first performances of Jack Gelber’s The Connection, a play that explicitly depicted drug use at a time when it still was a taboo subject. Each performance of The Connection was accompanied by an improvisational jazz set by pianist, Freddie Redd and saxophonist, Jackie McLean that led to the landmark Blue Note album.

The authorities caused problems for the Living Theatre. The IRS evicted the company out of it’s 14th Street space during the performances of The Brig. Actors in the infamous 1968 production of Paradise Now were arrested for indecent exposure on several occasions. Both Malina and Beck were briefly jailed for contempt of court following their IRS hearing. After their release, the theatre took a self-imposed exile to Europe for a few years touring Mysteries, Smaller Pieces, Frankenstein, Paradise Now, and Jean Genet’s Maids.

Returning to the states in 1968, the Living Theatre toured some of the aforementioned plays throughout the country before going to Brazil in 1971 to perform The Legacy of Cain. While there, Malina and Beck were jailed for possession of marijuana. Actor, Steve Ben Israel solicited the help of famous artists from the states to help get Malina and Beck freed from jail that resulted in their deportation and inspired the play, Seven Meditations On Political Sado-Masochism. Upon returning, they took The Legacy of Cain, The Money Towers, and Six Public Acts to Pittsburgh and performed in the streets there.

By 1975 The Living Theatre had gone back to Europe where they spent the better part of the next ten years travelling and performing in unconventional spaces such as prisons, squats, and publicly in the streets. By 1984 they’d returned to the U.S. to stage The Yellow Methuselah, Antigone, The One and The Many, and Julian Beck’s final play before his death in ’85, The Archeology of Sleep.

During the span of 1959 - 2012, The Living Theatre also had a large output of ephemera to publicize their plays and activities. The posters, handbills, programs, and photographs that were designed and produced by members of the theatre as well as collaborators was parallel to art movements of the time and reflected as much. The graphic design is uniformly superb: The work of nameless designers is showcased alongside known masters of the form such as Ray Johnson, Claes Oldenburg, and Jean Cocteau, to name but a few.

Taking a cue from Larry Clark’s work in assembling in situ collage narratives, Lizzi Bougatsos, Spencer Sweeney and Johan Kugelberg are staging this exhibition in real time, drawing from the Living Theatre archives to present an immersion into the visual narrative of the Living Theatre.

Johan Kugelberg: “When Judith Malina passed away in April, we immediately started discussing what we could do as a community gathering celebrating not only her wild, anarchistic, beautiful life, but also how to best showcase the enormous amounts of unseen visually arresting materials that had been gathered, after some thought we came to the conclusion that a living collage for the living theatre was our best bet. I immediately called Lizzi and Spencer who were game!”

A vast assortment of original Living Theatre posters, handbills and publications are available for sale, priced low to ensure that anyone can afford a beautiful 20th century avant-garde keepsake.