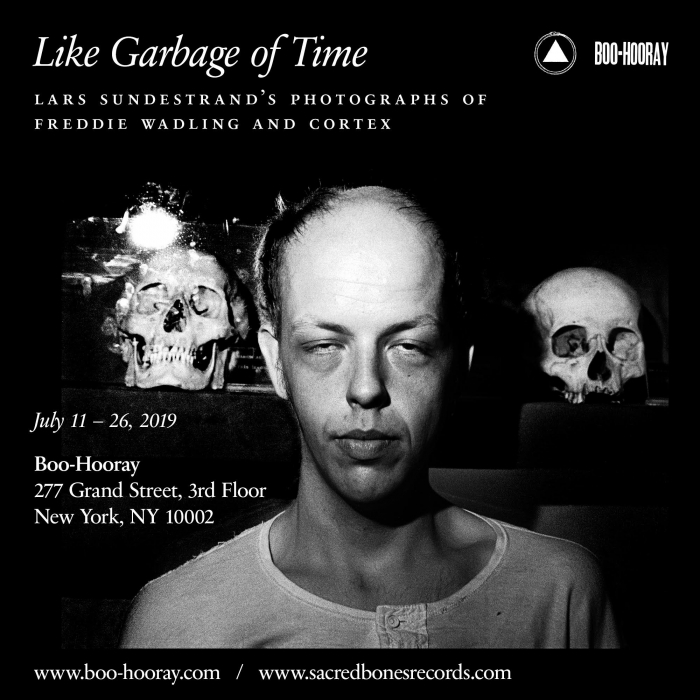 On July 12th, Sacred Bones Records & Boo-Hooray will re-issue the legendary debut album from Swedish post-punk outfit Cortex. Re-issuing Spinal Injuries has been a dream project of Sacred Bones since the label's conception. This new edition will be a U.S. only / vinyl only edition. Each copy of Spinal Injuries will come with a deluxe zine of archival photos and flyers, plus liner notes written by Johan Kugelberg. It also comes with a new pressing of the band’s “Sleepwalking / Jesus I Betong" 7". You can pre-order it here. Listen to 'Warrior Night' from the album here.

Boo-Hooray will also be hosting Like Garbage of Time, an art show featuring Lars Sundestrand's photography of Freddie Wadling and Cortex, at their NYC gallery at 277 Grand Street. The opening party is July 11.

Read the liner notes by Kugelberg, and find all album info below!

"Informed by deep and enthusiastic underground music knowledge, Cortex were key in the ongoing musical narrative of Swedish punk and post-punk. The late frontman of Cortex, Freddie Wadling (1951-2016) is a legend of enormous stature in Sweden: he is revered on the level of, say, Captain Beefheart or Serge Gainsbourg, and has been a key influence for generations of Swedish artists over the past four decades. His work ranges from proto-punk to equilibrist jazz vocals, and the trajectory of his cultural life from the Swedish underground of the early 1970s to his final years as an iconic interpreter of the Swedish songbook in the mainstream has to include a discussion and the experience of what many consider his greatest album: Cortex’s debut LP Spinal Injuries.

Recorded in April 1981, released in August 1983, Spinal Injuries by Cortex stands as one of a handful of masterpieces of Scandinavian post-punk. Freddie Wadling played in bands locally in his hometown of Gothenburg starting in the mid-1960s: garage bands, jam bands, one-offs, party-bands. Wadling belonged to the generation of the culturally astute who embraced the milestones as they happened: Captain Beefheart, The Velvet Underground, Zappa, Bowie, Eno, The Stooges, Hawkwind, alongside underground lit, underground comix, and art movements outside of the mainstream at a time where you had to dig hard to find out about stuff. No internet, no media mentions, no TV or radio. All word of mouth, hepcat to hepcat.

The first of Freddie Wadling’s bands that recorded were the mostly-covers punk/proto-punk outfit Straitjacket, featuring future members of The Leather Nun. A demo cassette has circulated over the years, recorded in 1978. It is certainly an indication of things to come, with a Swedish-language cover of the New York Dolls track “Human Being” the stand-out.

The next band for Wadling was Liket Lever, a double-drummer, wall-of-sound punk masterwork fully worthy of mention in the same breath as, say, “Television Addict,” by the Victims, “Snuten Kommer,” by Betonghysteria, or “Beautiful Happiness” by Drunks With Guns. Liket Lever released a sole 45 in 1979; “Levande Begravd” stands as one of the classics of Scandinavian punk — a relentless Phil Spector-style noise production, Wadling’s passionate vocals and propulsive harsh guitars hinting at what was to come.

Spinal Injuries was recorded in 1981 — the basics were put down in one day, with two days for overdubs, and like other classic instant records (The Black Crowes’ Southern Harmony and Musical Companion and X’s Aspirations spring to mind), you can truly hear the urgency in documenting a roar of a sound that had matured – nay, festered – on stage and in the rehearsal space. Spinal Injuries was released by Henrik Venant’s Heartwork Records in the fall of 1983. It had been sitting on the shelf for over two years due to the limited funds of the label, and had reached a legendary status during those two years, with cassettes of the full album circulating after the Heartwork release of the “Jesus I Betong” 7-inch in late fall of 1981. “Jesus I Betong” is an oddity — it is a cover of SPK’s “Slogan” with throwback-’60s stomper “Sleepwalking” as a B-side. For a one-off punk-era 45, it is excellent, but still only a whisper compared to Spinal Injuries.

Heartwork’s Venant was a key creative force of Swedish punk, fully as important as Wadling, and the body of work of his label is still forward-thinking. From its inception in 1978 up until the release of Spinal Injuries, thirty-odd records were released on the imprint, spanning art-punk, cold wave, gothy new wave and the more experimental end of post-punk. No release less than interesting, the activity of the label petered out following the Cortex release, but has seen several reanimations over the years, including recently.

The nucleus of Cortex came from Liket Lever, where the illuminated Klaus Dinger-esque drumming of Uno Wall came to provide a foundation for Wadling as a bass player, and the kind of telepathic rhythm section that made Cortex a peerless musical force in 1980s Sweden. For Spinal Injuries, fellow-Liket Lever alumnus Gerth Svensson had fine-tuned an extraordinarily effective guitar style  —  informed by the reigning post-punk of the time, but with a serious American proto-punk attack.

Spinal Injuries is an extraordinary record that does not necessarily resonate Swedish, or post-punk, or 1981. I think it is one of the finest unsung albums of this era, remaining a highly original rock record to this day, and still stands outside of time. As informed by punk rock as by art rock  –  echoes of Brian Eno, Roxy Music, Swell Maps, Neu!, Can, Tuxedomoon, and the list goes on  –  certainly a rock record that is truly well-informed by its influences, but that not even once recedes into a representation. Like most of the albums that we reach for over and over again, there is something within the grooves that makes us feel like we can step outside of the limits of contextual time and place.

Milestones remain milestones, even if most people haven’t found them yet. But you are here, so am I, and this masterpiece is on your turntable."