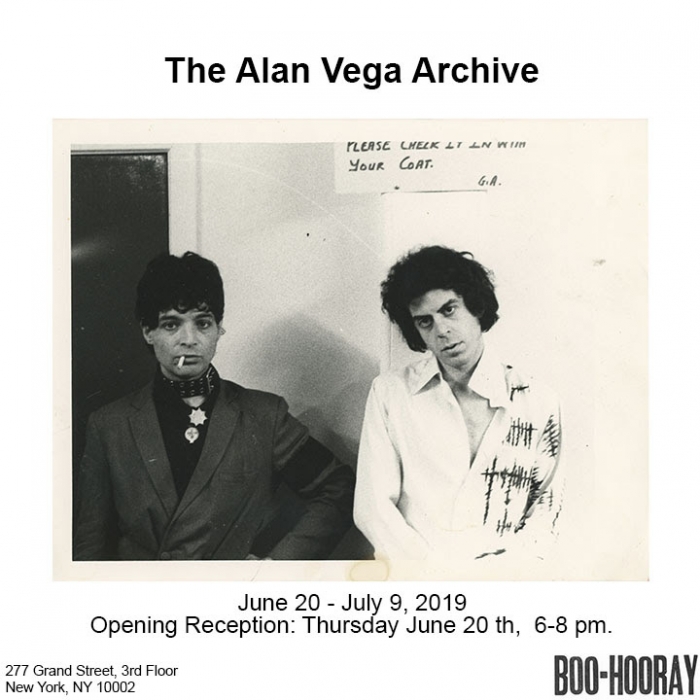 Alan Vega (June 23, 1938 – July 16, 2016), best known for being half of the legendary proto-punk duo Suicide, was also a prolific poet and visual artist. From his groundbreaking presence fronting Suicide in the early 1970s, to his solo music career from the 1980s up until his death, Vega’s mark on music was indelible and inspiring. Suicide’s debut self-titled album released in 1977 is widely considered one of the most influential ever made. His on-stage presence was marked by audience interrogation to the point of inciting riots, self-harm, and an unerring aura of coolness – perpetually smoking cigarettes in sequined blazers. Incredibly ahead of their time, Suicide’s influence on punk and electronic music is still being heard today, their stage presence and sound often copied but never duplicated.
Throughout his life, Vega was a visual artist, although not widely recognized as one professionally until much later in life. Working across mediums producing sculpture, painting, collage, and drawing; music and performance came to Vega as an extension of his creative process. He attended Brooklyn College in the late 1950s, studying fine art and psychics. Suicide was germinated at the Project of Living Artists in Soho, which Vega co-founded, and where he lived and worked in the 1960s; meeting Martin Rev there. Suicide’s first shows took place there, as well as other art galleries, such as OK Harris, along with punk venues such as Mercer Arts Center and CBGB’s. Vega always maintained his work as a visual artist throughout his life and presented here in his archive are a trove of drawings, collages, and works never exhibited before. In 1983, the Gladstone Gallery was inaugurated with a collection of his light sculptures. In 2002, he exhibited Collision Drive at Deitch Projects, the first major retrospective of his drawing and sculpture works from the 1970s. In 2009, The Museum of Contemporary Art in Lyon, France held a major retrospective of Vega’s drawings and sculptures entitled Infinite Mercy. Represented by Invisible Exports, a major exhibition of new Vega works entitled Keep It Alive was exhibited at their Lower East Side gallery in 2017, followed by a memorial retrospective exhibition of his works entitled Dream Baby Dream at Deitch Projects. In 2018, Galerie Laurent Godin held an exhibition of his final paintings, as well as drawings and light sculptures, entitled Universe.
The Alan Vega Archive, collected by his widow and long-time collaborator Liz Lamere, consists of audio and video, tour documentation, flyers, and ephemera, as well as photographs and press pertaining to his music career. Also collected are his personal notebooks and sketchbooks in which he wrote lyrics, poetry, and notes. His sketchbooks contain original drawings and designs. In addition to his sketchbooks, small collages and hundreds of pen and ink drawings on paper spanning the 1970s up until his death in 2016 chart his growth and evolution as an artist in conjunction with his musical output.

The Alan Vega Archive will be the second exhibition at Boo-Hooray’s Chinatown gallery space, located at 277 Grand St, 3rd Floor. Please join us for an opening reception on Thursday June 20th , 2019, from 6-8 pm. This exbibition is open 7 days a week, 12 – 6 pm. The exhibition will close Tuesday, July 9, 2019.