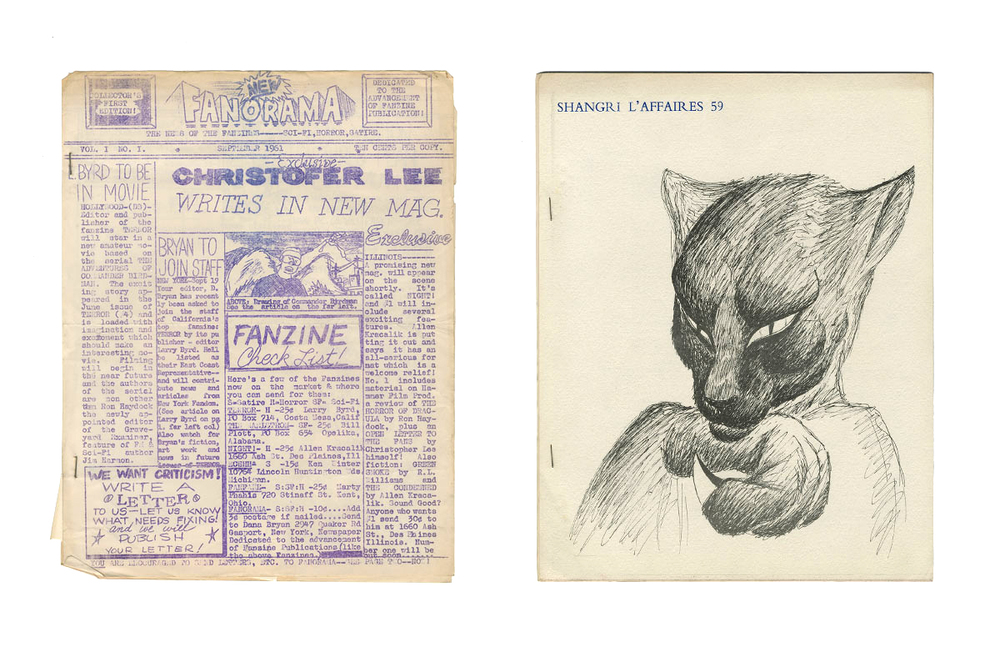 Lenny Kaye (b. 1946) is the guitarist for the Patti Smith Group and also a music historian and journalist. He compiled the 1960s garage rock compilation Nuggets in 1972, which had a profound impact on the development of Punk rock. Lenny's early influences as a writer and enthusiast in music developed during his time in science fiction fandom. This collection of approximately 2100 fanzines is Lenny's personal library.

Science fiction was one of the early subjects that spawned a substantial network of self- published magazines and newsletters, done primarily via mimeograph. Ranging from 1941 to 1971, the fanzines in this collection represent ground zero for the zine explosion that was to come years later in rock, punk, skate, fashion, and art. They are the origination of modern DIY publishing.

Primarily published on mimeograph machines, science-fiction fanzines were initially small-run circulars traded amongst fans that offered criticism, letters to the editor, and gossip amongst the SF, fantasy, and horror communities from the 1930s up until the digital era. These fanzines are about science-fiction subculture, and are populated with blindingly enthusiastic writing. Amazing visionary art adorns the covers of many issues. Some of the best-known authors of our age, including Robert Silverberg, Harlan Ellison, William Gibson, and Marion Zimmer Bradley got their start writing for these homemade publications.

Lenny's own fanzines (Obelisk, Sadistic Sphinx, Hieroglyph, and Pharaoh) are a perfect example of how many SF editors transformed into music journalists and performers. The connection between SF and music fandom may seem an odd gap to bridge, but a number of big names in music journalism, such as Lester Bangs, Paul Williams, and Greg Shaw wrote for science fiction fanzines. The distribution systems, terminology, and aesthetic of SF fanzines was transferred directly into the earliest rock fanzines, which were in turn instrumental in the explosion of punk rock in the mid- to late- 1970s. Performers are also counted among the contributors' list in this collection, like Michael Moorcock and the Fugs' Tuli Kupferberg.