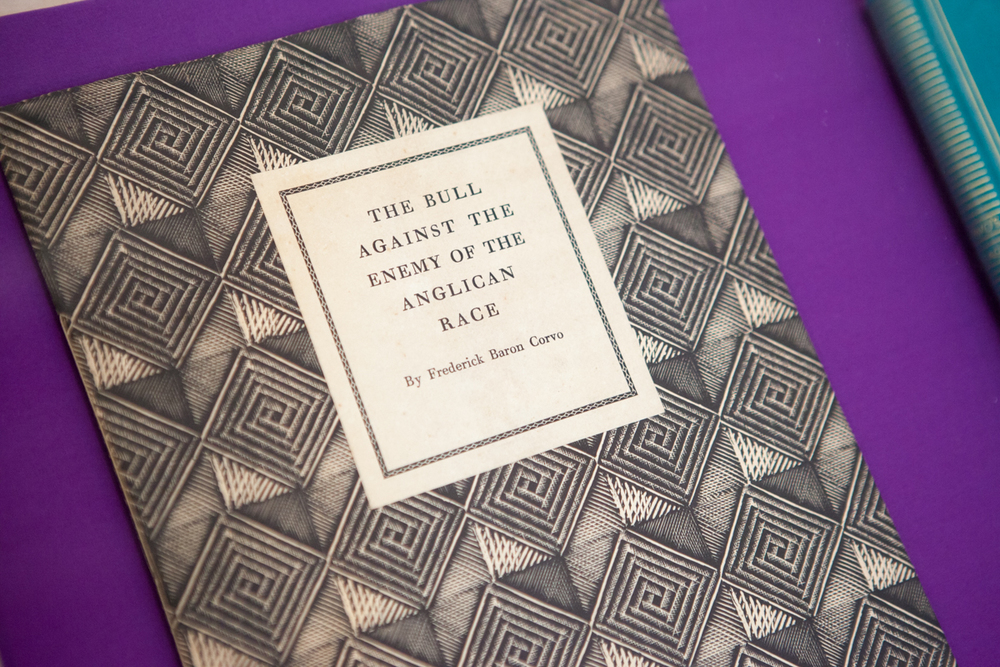 The Frederick Rolfe, Baron Corvo Collection consists of 12 manuscript items, 67 monographs by or with contributions by Rolfe, 87 secondary works on or related to Rolfe, 30 periodicals, 28 photo prints, and 9 pieces of ephemera.

Frederick William Serafino Austin Lewis Mary Rolfe, also known as Baron Corvo, was an eccentric author associated with the Yellow Book circle and fin-de-siècle decadent culture. A convert to Catholicism, Rolfe studied to be a priest, but was rejected. He wrote short stories for the Yellow Book, and painted religious banners with boy-saint motifs. He had a poem included in the legendary Uranian rarity Love in Earnest which he forced the publisher to manually remove post-publication because of a quarrel with the editor. He wrote a whirling dervish of a confusing factoid-marinated mess of a book about the Borgias, only to demand that the publishing house remove his name from the project when they dared to edit him. He photographed teenage boys in the nude. He made enemies left and right and cherished them. He invented hundreds of words. He swore himself to celibacy for 20 years, and when they were up lead a life of debauchery in Venice (which he wrote about in graphic detail in his posthumously-published Venice Letters). His best-known works are his 1904 novel Hadrian VII, a wish- fulfillment narrative in which a stand-in for Rolfe himself becomes Pope, and The Desire and Pursuit of the Whole, considered by admirers like Susan Sontag and Graham Greene to be the greatest novel written about the city of Venice.

Corvo died in October of 1913 and was close to forgotten as an author by the end of the Great War. AJA Symons, a great eccentric in his own right, was a brilliant dilettante who had started the First Edition Club and the Food and Wine Society, and who had developed a great expertise in Victorian literature. Corvo became his obsession, his quest, and in 1934 Symons’ classic book The Quest For Corvo was published and met with great enthusiasm. The book, which is in print to this day through Penguin, can be called the birth of the modern biography and is a masterpiece of layered realities and exploration of the dynamic between author and subject which certainly merits comparison to Boswell and Johnson of the turn of the last century.

More and more Corvine reprints followed. Some were extremely limited fine print editions, and some were mostly circulating in gay bookish circles. Two more biographies followed, as well as extensive commentaries and finagling of ultra- minutiae. The clichéd outcry of the genius, misunderstood and unappreciated during his lifetime did in Corvo’s case come true: Every letter, receipt, scribble and note has become a valued artifact, argued over by scholars and enthusiasts alike.

Highlights of the collection include:

An autograph letter signed by Frederick William Rolfe to A. H. Bullen, August 10, 1903

A first edition copy of Rolfe’s first published work, Tarcissus: The Boy Martyr of Rome, one of only a handful of surviving copies

One of only five known copies of the suppressed first edition of Rolfe’s Don Renato, described by Corvo bibliographer Cecil Woolf as “one of the rarest of modern books”

A first edition of John Gambril Nicholson’s scarce Uranian poetry collections Love in Earnest and A Garland of Ladslove, both containing material related to Corvo

First editions of all of Rolfe’s major works

The first American edition of A.J.A. Symons’ The Quest for Corvo

A limited-edition copy of Symons’ Frederick Baron Corvo: Read at the Four Hundred and Eighteenth Meeting of the Sette of Odd Volumes, containing a tipped-in manuscript leaf by Rolfe

A collection of periodicals with contributions by Corvo