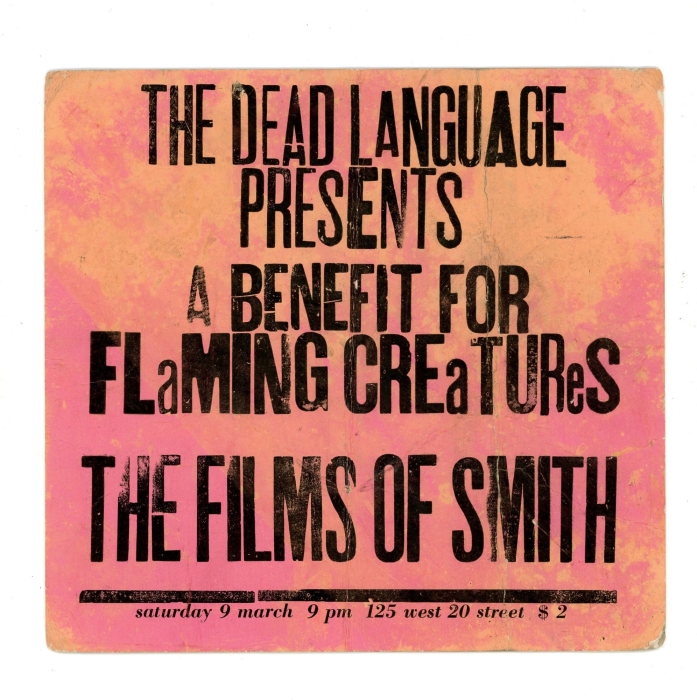 Piero Heliczer, born in Italy in 1937, was a poet, filmmaker, and publisher active in underground art scenes, working and living between New York, Paris, Amsterdam, and London. While attending Forest Hills High School in New York, he met Angus MacLise, who would later become the first drummer for the Velvet Underground. Heliczer entered Harvard in 1955, staying there two years before moving to Paris. In 1958 in Paris, with MacLise, he founded The Dead Language Press, and began letterpress printing now-rare books of art and poetry as well as broadsides by himself and others, including Jack Smith’s The Beautiful Book and A Pulp Magazine for the Dead Generation by Henk Marsman, Om, and Gregory Corso.

In addition to his work as a fine printer and poet, Heliczer was an underground filmmaker and actor. Upon his return to New York in 1962, he fell in with Warhol’s Factory crowd, appearing as an actor in several Warhol films as well as creating his own films. He also appeared in Jack Smith’s groundbreaking Flaming Creatures, as well as collaborating with Jonas Mekas, La Monte Young, Marian Zazeela, Tuli Kupferberg, Gerard Malanga, Harry Smith, Charles Henri Ford, Ira Cohen, and others. His films often were presented as multimedia happenings, including bands providing a live score, most notably with various iterations of The Velvet Underground. However, the recognition afforded to many of his contemporaries did not find Heliczer, and by the 1980s due to his nomadic lifestyle and struggles with drug addiction, he was living on the streets. He received reparations payments from the German government for the murder of his father, which he primarily gave away to fellow artists, and using what remained to buy a small house in Normandy, where he moved and ran a small ad-hoc book shop. He died in July 1993, age 56, in France, in a traffic accident when his moped was crushed by a truck.

Alongside The Dead Language publications, this archive contains a collection of manuscripts and correspondence, holographic letters, typescripts, and vintage photocopies, sent predominantly by Heliczer to Jonas Mekas and Ira Cohen, among others. The archive also includes appearances of Piero Heliczer in magazines and mimeo publications between his first appearance in the Cambridge Review when he was a student at Harvard in 1955 to his mature work in 1975. A significant portion of the poems included in these small publications later found their way into Heliczer’s books like the Soap Opera or Abdication of the Throne of Hell. This archive presents a close to complete survey of Heliczer’s career and life. Featured as well are many authors who championed or published alongside Heliczer, including Angus Maclise, Allen Ginsberg, Gregory Corso, Gerard Malanga and others.