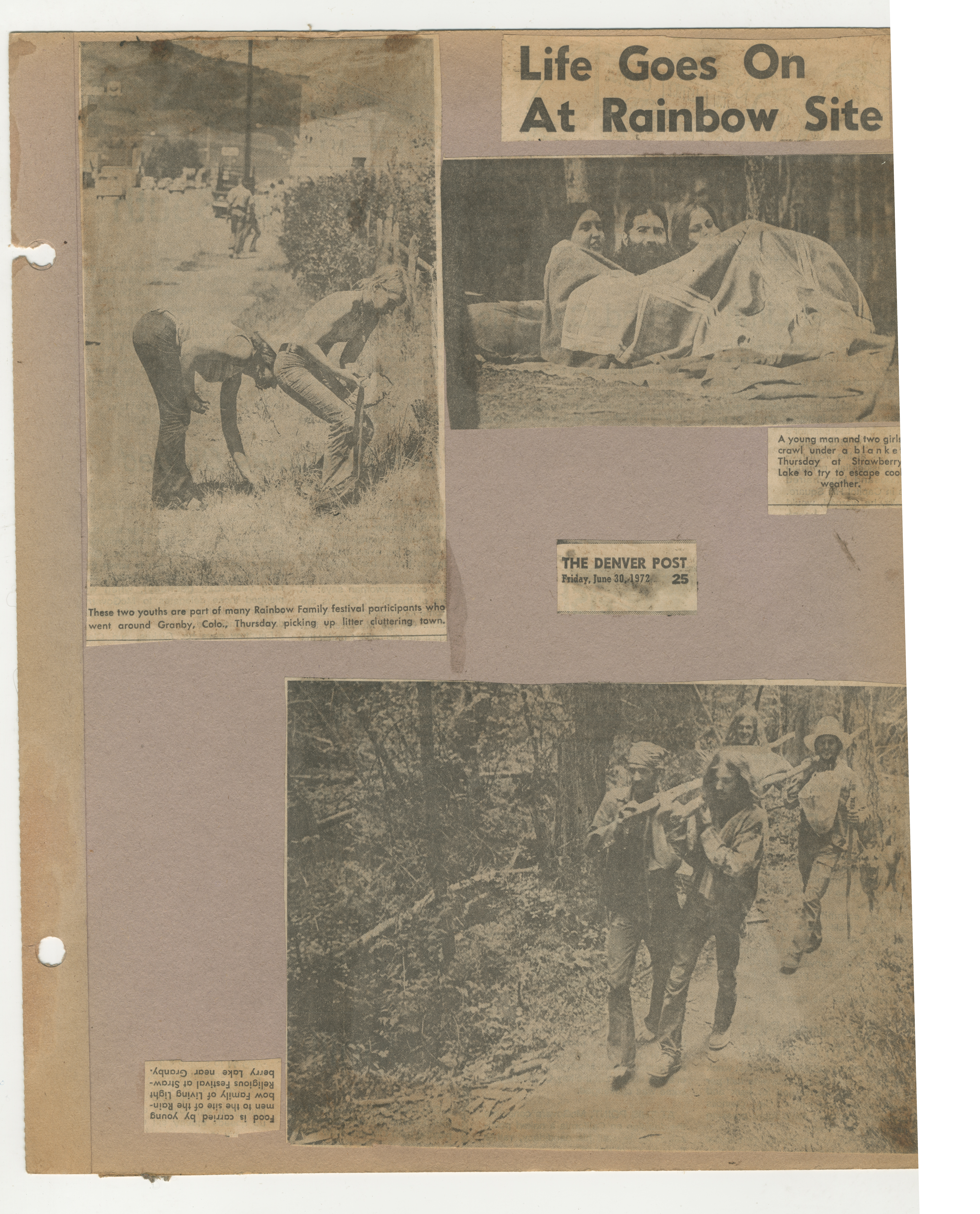 The Rainbow Family of Living Light is a collective of individuals who have spent decades cultivating an international community that comes together for massive demonstrations called Rainbow Gatherings with no one spokesperson in hopes of showing a peaceful alternative to a destructive and consumerist world. Established in 1970 by Garrick Beck and Barry “Plunker” Adams, The Rainbow Family attracted like-minded people along the west coast from networks established in alternative communities, traveling concert-goers, and new age spirituality enthusiasts to plan out what became the first Rainbow Gathering located in Strawberry Lake, Colorado in 1972. Beck’s vision of a large temporal communal gathering was inspired by the music festivals of the time such as Woodstock where temporary communities would operate within established areas of a concert. Rainbow Gatherings were intended to be a “non-music” festival organized by consensus with focus on an intentional communal engagement rather than a commercial venture. The Rainbow Gatherings are strictly non-commercial, and open to all who would like to attend so long as they share the tenants of peace, environmentalism, and non-violence.

Over the years the Rainbows (the preferred term for participants) have developed a shared vocabulary, an internal group of decision makers called the Council, a peace-keeping crisis team called the Shanti Sena, and a medical staff emphasizing homeopathic routes to healing called C.A.L.M. (Center for Alternative Living Medicine). This archive collects meeting notes and internal correspondence between members in the Council, correspondence with forest service officials regarding Rainbow Gatherings, and blueprints and maps used to strategize Rainbow Gatherings all over the world. This archive also contains the personal phone numbers and addresses of hundreds of Rainbow Family members and associates collected at gatherings or sponsored events that have been crucial in developing their internal organization of “Focalizers” (volunteers who plan out events, layout and distribute publications, and generally oversee the internal workings of the Rainbow Gatherings).

The Rainbow Family are strong advocates of eco-consciousness and have been promoting environmental causes and sustainability well before it was commercialized. One of the primary focuses of every Rainbow Gathering is to manage a low carbon footprint by reducing waste and respecting nature. At gatherings temporary kitchens called “Lovin’ Ovens” are made on-site to provide clay oven baked goods, open-air latrines referred to as “shitters” are made and treated with ash and lime, and water from a local source is filtered and utilized to supply attendants. Outside of the gatherings, the Rainbows maintain an extensive network where they share news of anti-nuclear protests, anti-logging campaigns, and sustainable agriculture. Also present in the archive is documentation of networks of car-pools for Rainbow Gatherings. This archive contains correspondence and documents pertaining to meetings and conversations that led to how the Rainbows developed their internal order as well as flyers, handbills, mailers, pamphlets, and petitions that document Rainbow Gatherings and Rainbow-sanctioned protests from 1970 to the present reflecting their political and environmental stance.

The Rainbow Family has fought many legal battles over the years citing constitutionally provided rights of free speech and the right to peaceably assemble to establish as much autonomy from federal services as possible. For over forty years, the Rainbow Family has often been at odds with forest services and local state law officials, resulting in numerous lawsuits brought about by and against the Rainbow Family. This archive contains carefully annotated correspondence and copies of legal documents pertaining to all of these court cases, which as a whole set a much larger precedent for defining mass protests and critical engagement with the government.