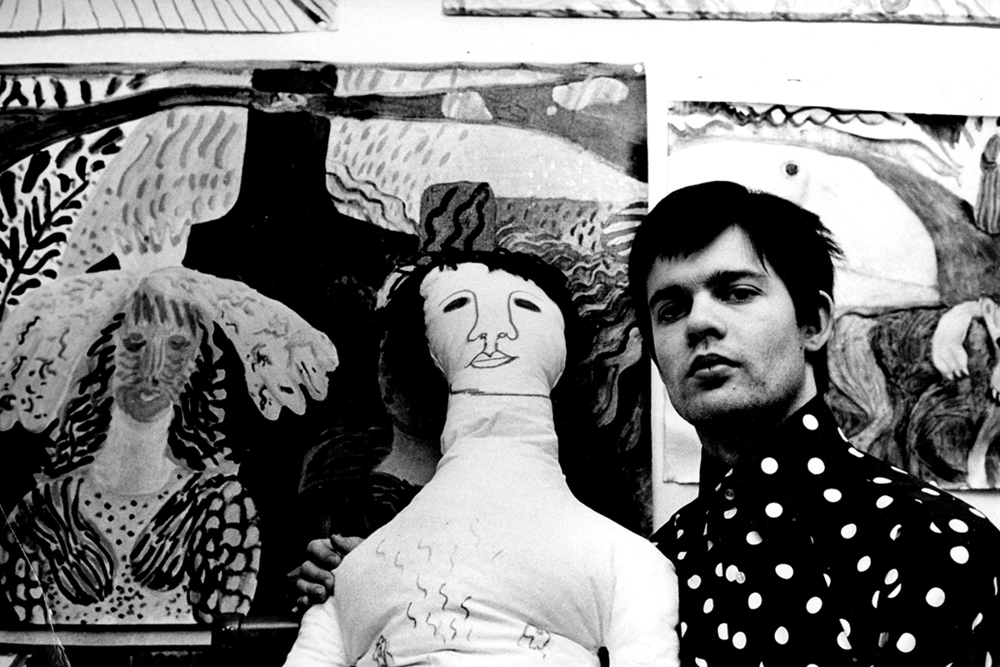 Carl Johan De Geer, born in 1938, grew up in absurd privilege and abject unhappiness as a member of one of Sweden’s most powerful aristocrat families, his parents showed no discernable interest in him or his siblings. He grew up on a grand country estate with his grandparents, went to art school in the late 1950’s, and in an epic choice of rejection lived his life to this day as a perennial Swedish underground artist, working in counterpoint to the privilege of his surname, and simultaneously getting noticed by the societal and cultural elites (who sometimes overlap) in that duck-pond of a nation due to that very same last name.

Carl Johan De Geer, as a masterful Leica M4 snapshot giant à la Van Der Elsken or Moriyama, had the sacred ability to capture the monotone grit of everyday life and demand its reflection. The crumbling façades and interiors of buildings moments before demolition provided a backdrop to a culture where sixties- Stockholm-bohemians were making love and raising families, paying rock bottom month-by-month rent.

De Geer gives us a glimpse of a Sweden inhabited by people who are the other, whose life experience is impregnated with otherness, providing a visual cue into an unseen world, alas the wonder of great documentary photography. The visible scratches, fades and imperfections, the wabi-sabi of this collection of vintage prints, is reflected in the images.

Throughout his life, De Geer developed a polyglot canon that exhibited a multitude of disciplines, all of which he seemed master, avoiding the all too common problem of dilettantism.

De Geer’s rarified work as a textile designer from the 60’s until today, provided a bright and cozy decorative through-line in the often nomadic life of countercultural living arrangements. The intricate and playful designs, combined with vivid coloration, betray another medium where the artist is fluent. Among other occupations, De Geer is a skilled painter, silk-screen artist, novelist, filmmaker, and a producer of documentary material.

As an auteur of Swedish independent cinema, the mass of his feature-length and short films, produced with his late partner Hakan Alexandersson, were a unique coagulation of high and low culture. This strange concoction of influences, ranging from Freud to Mickey Spillane, culminated in the bizarre and erudite children’s television program: ‘Tartan (The Cake)’. At the time loved by children and scorned by critics and pedagogues, it is today hailed as a masterpiece of absurdist media.

The feature-length films, often with a gothic horror slant, rival Terry Gilliam for the fine-tuned execution of both physical and inner dirtiness, and of course for a hundredth of a Hollywood production budget.

Some of the prints we show were utilized by Carl Johan De Geer as work samples, some were sold as postcards at Galleri Karlsson (back then you could get silver- gelatin 4×6 prints on postcard stock made for pennies), some were used in the assembly of his rare 1980 photobook Med Kameran Som Tröst(those are the ones with notations), and a handful were used as exhibit prints.

Founded in 1964, Galleri Karlsson, was the inspired idea of Bo Karlsson. Emerging out of the jazz-flavored, Leftist Stockholm underground, Galleri Karlsson became the epicenter of the countercultural movement in Sweden.

Karlsson’s ability to gather artists together allowed for a strong and cohesive underground movement. The myriad of art events ranging from painting, photography, installations, Swedish Lettrist stylings, happenings, and jazz concerts, endeared Bo to his artists. Perhaps above his progressive views on exhibition and aesthetics, Karlsson also took a much lower cut than any other Stockholm gallery, securing his central place in the Swedish underground. Exhibited artists included: Lars Hillersberg, Lena Svedberg, Ulf Rahmberg, Carl Johan De Geer, Marie-Louise De Geer, Ture Sjolander, and it was at Galleri Karlsson that Anders Petersen first unveiled the celebrated images from the ‘Café Lehmitz’ photography series.

The gallery achieved turbulent notoriety on April 29th, 1967 when Carl Johan De Geer and his wife Marie-Louise were exhibiting a collection of silk screens.

Opening night offered a contradictory conflux of artists, radicals, politicians, media people, Swedish establishment members, and nobility, as the De Geer family comes from royal blood. The response to the radical work on display predictably varied from enthusiasm to loathing. The Master of Ceremonies of the Royal Family, present at the opening, stated: “the De Geer family had to make themselves noticed one way or another.”

Garnering the most attention at Galleri Karlsson was a triptych of striking posters with confrontational language scrawled across nationalistic images. The first poster stated “Skanda Flaggan, Vagra Vapen” (Desecrate the Flag, Refuse to Bear Arms) featuring an image of a burning Swedish flag. Written across the flag: “KUKEN” (DICK).

The second poster presented: ‘Vagra Vapen, Vagra Morda’ (Refuse to Bear Arms, Refuse to Be a Murderer). The third silk screen, with an American flag that had its stars replaced with swastikas stated: ‘USA MORDARE’ (USA MURDERERS). Per Bjurstrom, Sweden’s leading expert in fine printing, purchased copies of all three works on behalf of his then employer, the Swedish National Museum.

At sunrise the following morning, the police, assisted by a locksmith, entered the gallery and went about confiscating and destroying all available copies of the flag posters. 31 of a total 35 copies of ‘Vagra, Vopen’, 30 of 35 total copies of ‘Skanda Flaggan’, and 11 of a possible 20 copies ‘USA MORDARE’ were destroyed by authorities.

“An interesting thing about this case is freedom of speech for artists does not exist, art does fall under freedom of expression in Swedish society, to express an opinion through a work of art is the same as standing and yelling on a street corner, you can be arrested for disturbance of the peace or the desecration of a national symbol, nowadays as it was back then.” – Carl Johan De Geer, 2004

The astonishing visual artist, Lena Svedberg, committed suicide at the age of 26. A compulsive draftswoman, she was a romantic and debauched personality that symbolized the apex of sentiment and identity for the Stockholm underground. Svedberg avoided galleries making her work hard to obtain. Additionally, her motifs were so disturbing she became an artist that categorically “didn’t sell”, adding to her rarity.

Carl Johan De Geer’s masterful melancholic documentary (to be screened upon request) ‘I Remember Lena Svedberg’ recalls Lena Svedberg as constantly drawing, in fact she drew so often that she ran out of motifs, consequently making her the greatest political artist in Puss Magazine.

Spanning a mere twenty-four issues, Puss (Kiss) was a strangely explicit and confrontationally political publication that began its run in January 1968.

Bo Karlsson, inspired by counterculture periodicals such as The Village Voice, East Village Other, and England’s Oz Magazine, commenced Bazaar in 1967. The publication folded after second issue. Yet, Bazaar had paved the way for the existence of Puss.

Unlike other underground magazines, Puss became a satire-driven art zine full of radical politics and sexual liberation. Puss dealt with the battle and confusion of the increasingly political correctness of the left, inciting rancor in both liberals and the right wing. Armed with their anti-capitalist, anti-USA stanza, they equally irritated the Swedish Stalinist and Maoist Left.

Writing reports from the United States, was Oyvind Fahlstrom, who had been working in New York City since his involvement in the mixed-media performance ‘Kisses Sweeter Than Wine’ in 1966 (produced with John Cage, Robert Rauschenberg, and David Tudor). Fahlstrom provide Puss with information on the East Village and the New York Art Scene with its radical living, street theater, and underground media.

Puss did not reverberate strongly with the greater society of Sweden at the time. It was far too radical, too strange to fully comprehend. Yet each passing decade sees more and more people sympathizing with its groundbreaking work.