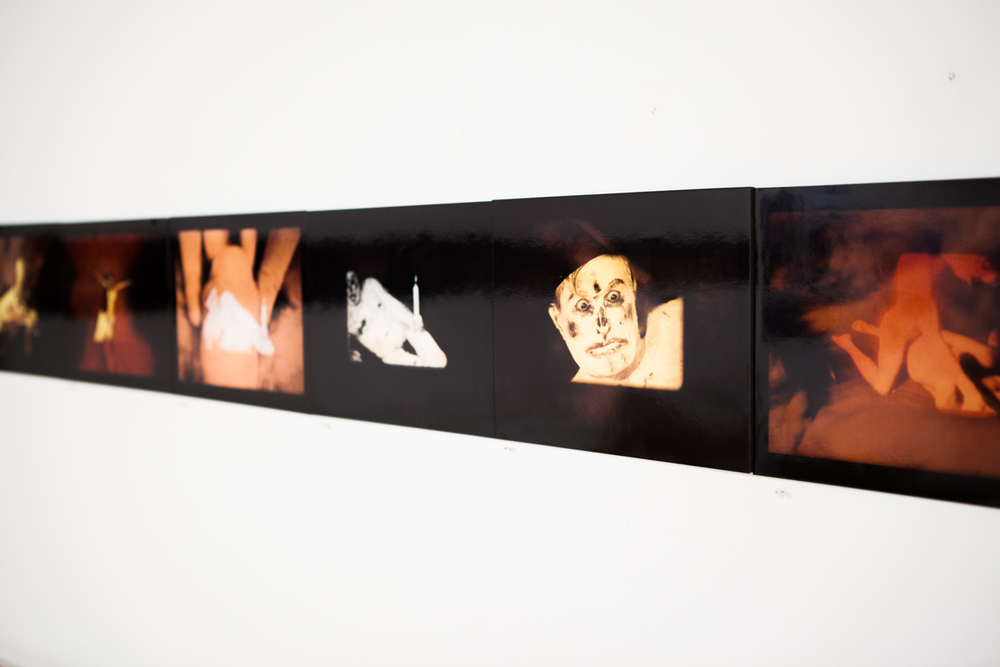 Barbara was the moving force and coordinator between us all. – Lou Reed, December 2012

the subject, what else could it be, was all about cocks & cunts & fantasies

painted on their nude bodies

so i spent 3 months chopping the hours of film up

and then toss and toss

and one by one

Absently enchantedly Destined to splice it together

and separate on to two different reels

and then project one reel half the size

inside the other reel full screen size

and then i showed it

Boo-Hooray in co-operation with Jonas Mekas and Anthology Film Archives staged an exhibition of still images and ephemera relating to Barbara Rubin’s landmark 1963 underground film Christmas On Earth. This was the first of a triptych of homages to legendary figures of the New York City underground, chosen by Jonas Mekas. Barbara Rubin was followed by “Jack Smith – Wait For Me At The Bottom Of The Pool” and “Piero Heliczer & The Dead Language Press.”

The exhibition ran from December 2012 and ran through January 2013. Festive seasonal sausages from Zum Stammtisch and pretzels by Keegan Cooke were served. In conjunction with the exhibition, a screening of Christmas On Earth and To Barbara Rubin With Loveby Jonas Mekas was screened on January 9th, 2013 at Anthology Film Archives.

Originally titled Cocks And Cunts, Christmas On Earth is a film of sexual tableaux vivants, gay and straight, where two separate reels of film are superimposed on each other, with additional light effects layered on these images, all accompanied by a contemporary rock radio soundtrack, as specified by Rubin.

Barbara Rubin (1945-1980) was a filmmaker, writer and scenester who started working for Jonas Mekas at the Filmmaker’s Cinematheque in 1963. This was the year she filmed Christmas On Earth in the Lower East Side apartment of Tony Conrad and John Cale at 56 Ludlow Street. This was also the future home of Sterling Morrison and Lou Reed, and where the first version of “All Tomorrow’s Parties” was recorded in the summer of 1965.

Rubin introduced The Velvet Underground to Andy Warhol. A photograph exists of her filming The Velvet Underground performing at the Café Bizarre in December 1965. The footage she shot is lost. As a human link document, Rubin also introduced Bob Dylan to Allen Ginsberg, and according to John Cale, Edie Sedgwick to Andy Warhol. She left New York at the tail end of the 1960′s, became heavily involved in Orthodox Judaism, and died in childbirth in 1980 in France.

After a handful of screenings in the mid- to late- 1960s, Christmas On Earth remained unseen for years as per Rubin’s instructions for the film to be destroyed. Luckily, Mekas did not follow through on Rubin’s request, as she later changed her mind and allowed him to screen and distribute the film. Since 1983, it has been screened regularly, and is slowly but steadily taking its place in the canon of 1960′s underground films and cultural milestones that unraveled American censorship law and opened the field for artistic studies of sexual narratives.

Boo-Hooray published a slip-cased multi-volume catalogue, in an edition of 55 copies with silkscreen covers, to commemorate this exhibition and the 90th birthday of our hero Jonas Mekas.

Volume 2 is a 128 page book with silkscreened covers containing reproductions of a variety of contextual materials, including unproduced scripts and film prospectuses by Rubin, handbills, newspaper & magazine clippings.

Volume 3 is a 68-page volume in silk-screened boards containing reproductions of manuscript letters by Barbara Rubin dating from ca. 1964-1968 to Jonas Mekas, Charles Hoag, and others. It also features oral histories on Rubin by Amy Taubin, Rosebud Pettet and Richard Foreman alongside essays and texts by Daniel Belasco, and exhibit curators Jonas Mekas and Johan Kugelberg.

Hadn’t I once a youth that was lovely, heroic, fabulous, something to write down on pages of gold? – I was too lucky! Through what crime, by what fault did I deserve my present weakness? You who imagine that animals sob with sorrow, that the sick despair, that the dead have bad dreams, try now to relate my fall and my sleep. I can explain myself no better than the beggar with his endless Aves and Pater Nosters. I no longer know how to talk!

And yet, today, I think I have finished this account of my Hell. And it was Hell; the old one, whose gates were opened by the Son of Man.

From the same desert, toward the same dark sky, my tired eyes forever open on the silver star, forever; but the three wise men never stir, the Kings of life, the heart, the soul, the mind. When will we go, over mountains and shores, to hail the birth of new labor, new wisdom, the flight of tyrants and demons, the end of superstition, — to be the first to adore! — Christmas on earth! The song of the heavens, the marching of nations! We are slaves, let us not curse life!  – Arthur Rimbaud, ‘Morning’ from A Season In Hell