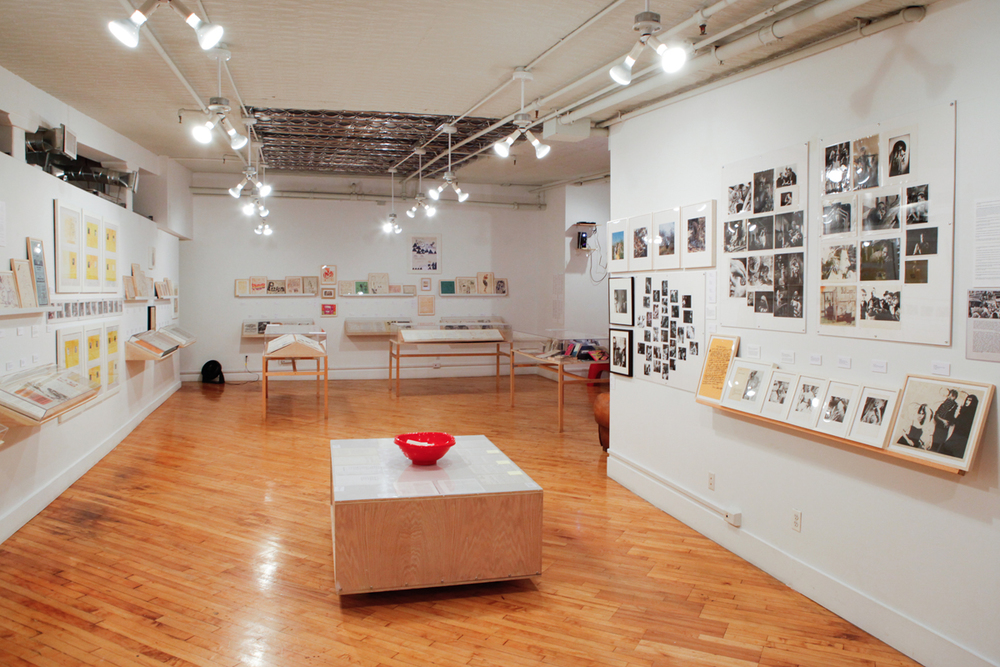 Jonas Mekas and Johan Kugelberg curated “Wait For Me At The Bottom Of The Pool,” artwork, ephemera, and photography by Jack Smith. The exhibition at Boo-Hooray opened on Valentine’s Day, February 14th, 2013.

Jack Smith, 1932-1989, was a master of the exotic idiom, working in theatre, underground film, photography, graphic design, drawing, and slideshows. He was one of the path-finding pioneers of American post-war underground aesthetics. Boo-Hooray exhibited handbills, posters, photographs, letters, artwork and collages by Jack Smith, spanning his career.

He could spend hours readjusting some peripheral aspect of a pile of debris, puncturing long silences only with occasional cryptic non sequiturs about penguins or a startling piece of extremely bad nutritional advice.  — Gary Indiana

Unlike Warhol, who had a genius for attracting and holding on to collaborators and powerful supporters, Smith, who was fully as charismatic, was a Blakean agonist in his personal relations, thriving on enmity, with the power to mythologize his antagonisms, his obsessions, and his fantasies.  — P. Adams Sitney

Jack Smith was to Republic Pictures what an idiot savant is to square roots.  — Rene Ricard

At once primitive and sophisticated, hilarious and poignant, spontaneous and studied, frenzied and languid, crude and delicate, avant and nostalgic, gritty and fanciful, fresh and faded, innocent and jaded, high and low, raw and cooked, underground and camp, black and white and white-on-white, composed and decomposed, richly perverse and gloriously impoverished, Flaming Creatures was something new under the sun. Had Jack Smith produced nothing other than this amazing artifact, he would still rank among the great visionaries of American film.  — J. Hoberman

Boo-Hooray also produced a silkscreened print of Jack Smith’s drawing “Lobotomy in Lobsterland,” as well as Two Press Releases by Jack Smith. Two Press Releases  is a miniature facsimile reprint by Boo-Hooray of Jack Smith’s press releases for ”Francis Francine’s Period a Day Late” (ca. 1963) and “Hamlet and the 1001 Psychological Jingoleanisms of Prehistoric Landlordism of Rima-Puu” (1971). For our Small Little Series, we also printed “Selections from Jack Smith’s Record Collection,” which came with a CD of the titular music selections.

“Wait For Me At The Bottom Of The Pool” was Boo-Hooray’s second installment of exhibitions celebrating Jonas Mekas’ 90th birthday.