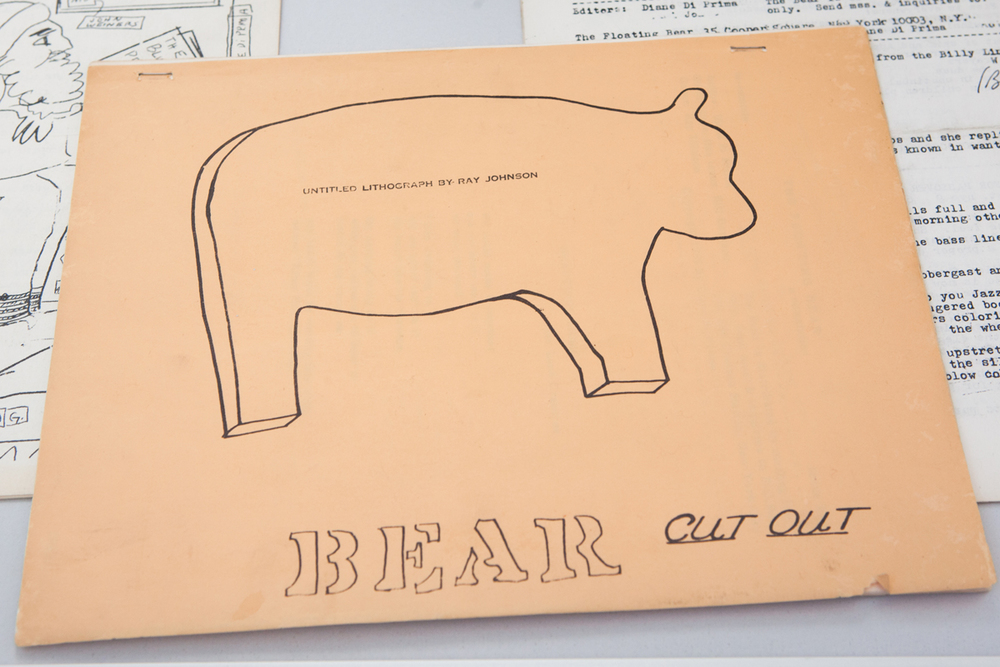 At the 2013 New York Art Book Fair at MoMA/PS1 there was a dual exhibit in the Ray Johnson Room (Gallery Y) devoted to The Sinking Bear and Ray Johnson’s A Book About Death, displayed alongside related ephemera and zines.

Edited by the mysterious Soren Agenoux (by differing accounts a mail artist, playwright, suspected thief and forger), The Sinking Beararose from a loose circle of artists associated with various downtown New York scenes, particularly the circle around the poetry newsletter Floating Bear, edited by Diane Di Prima and Leroi Jones, which not only filled a vital role allowing poets to share and refine their work, but also provided fodder for the rather vitriolic ridicule presented in Sinking Bear, which balanced a fine line between imitating Floating Bear and acting like its nemesis.

Diane Di Prima had sublet her apartment to Soren Agenoux before leaving for California, entrusting him with funds to print the 24th issue of Floating Bear. He fulfilled his obligation in the shoddiest manner, but also began putting out his own zine using Floating Bear as a model: focusing not on poetry as a discipline, but on amphetamine-fired gossip, parodies of advertising and real or fictitious overheard conversations.

Collagist and mail artist Ray Johnson was involved with this semi-mythical bitch-zine. A number of his works appear in The Sinking Bear, most in his inimitable voice and style, including a collage based upon one of his pages from A Book About Death.

Reading The Sinking Bear gives the impression of being at a party where people are saying brilliant things, and you’re torn between retreating and writing them down or staying at the party and risk forgetting what was said in the gray light of morning. Original issues are hopelessly rare; it took three of us ten years of searching to put together (what we think is) a complete run.

Boo-Hooray and Division Leap co-published the exhibition catalogue The Sinking Bear, the first publication dedicated to the most insane, beautiful and innovative mimeo zine of the 1960s. The oversized 162 page catalogue contains all issues in order, printed by Keegan Cooke’s Circadian Press on risograph with silkscreened boards in an edition of 300 copies. A portion of the proceeds from the publication benefited the ongoing quality work of the mighty Printed Matter.

Ray Johnson’s legendary A Book About Death was also exhibited.

These pages are rarely seen outside of the rarefied world of hardcore Ray Johnson collectors. The cryptic pages were printed offset individually by Johnson, and then mailed out to people in his circles. Ray Johnson would often point out that he’d purposefully avoid sending people all the pages.

If A Book About Death were finished, it would lose much of its meaning as a process rather than a product. A Book About Death, first planned as a whole that could close around itself like the ouroboros on PAGE 1, had to become an open book, indefinite and undecidable. For Ray, a closed book could be like a death, just as dying could be like closing a book. Because Ray wanted death to be an open book, his A Book about Death had to remain incomplete, with pages that would never be read.

We showed 12 of the 13 pages Ray Johnson is known to have printed for A Book About Death, as alas, we didn’t have a copy of page 4 to show.