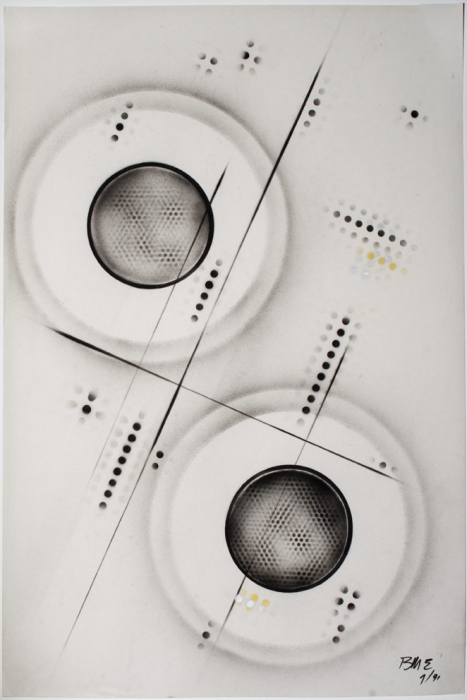 Boo Hooray and Envoy Enterprises are proud to present The Line Between, an exhibition of seldom seen paintings from the 1990's by painter, publisher and direct action political figure Ben Morea.

Ben Morea is a painter, publisher, and direct action political figure. As the unseen hand of the 1960s revolutionary underground, Morea is infamous for shutting down MoMA, forcibly entering the Pentagon, occupying the Fillmore East and Columbia University, and dumping the neglected garbage of the Lower East Side into the fountains of Lincoln Square. He was the force behind the 1960s art/anarchist collective Up Against the Wall Motherfucker and the legendary anarchist zine/broadside Black Mask.

Morea’s paintings have one foot firmly in a Suprematist camp while the other remains grounded in a playful use of composition. Traversing mid-century abstraction that utilizes basic geometric shapes and a primitive approach to mark making, and inspired by the spiritual as much as intellectual, The Line Between is comprised of work Morea made in the early 1990’s after abandoning painting for decades.

Picking up where he left off in the mid-‘60’s, Morea utilized spray paint as his primary medium to make a series of works on paper that he considers a rebirth and a continuation of his artistic explorations. The work asks the viewer to consider that there are no conclusions artistically or philosophically, but rather a series of loose answers to immediacy.

Exhibiting only a few times since he began making art again, Morea had a show of paintings and graphic work from the ‘60’s with Boo-Hooray in ‘Unseen 50 Years: Paintings By Ben Morea 1964-65’ in the Summer of 2014, and an earlier Boo-Hooray exhibition of his work as a publisher, illustrator, and direct action political figure, ‘Opposition: Black Mask, Ben Morea, & U.A.W.M.F.’ in January of 2014.

Ben Morea began his art practice working in abstract painting. During this period, roughly the years 1962 and 1963, he was mentored by Aldo Tambellini, who informed not only an aesthetic sensibility, but the idea of art leaving the confines of white-walled galleries. Morea exhibited in occupied East Village buildings, public spaces, as well as traditional galleries, where he showed beside Tambellini, Ad Rinehardt, Louise Bourgeois, and Ron Hahne. Outside of the abstract expressionists, he was influenced by Russian Suprematists, ancient art, and spiritual and mythological writers like Jung and Joseph Campbell. His medium was house paint and aerosol, which he applied to canvases, paper, or less conventional surfaces like salvaged shattered windshields.  Disgusted by Pop Art, Morea left the visual art world by 1966. He began staging direct action events and publishing radical political philosophy in his publication Black Mask.

Black Mask subtly dissolved in the later 60s. Morea concurrently began operating with collaborators under the names Up Against the Wall Motherfucker, International Werewolf Conspiracy, and the Family. During this time, he became occupied with Native American imagery, and the idea of the “warrior” as a pure artist and agent of change. As opposed to mainstream pacifist hippiedom, Morea believed in, when appropriate, armed struggle. He called his movement “Armed Love.”

By 1969, Morea was reportedly under constant surveillance and found himself in legal trouble. He fled New York and disappeared into the mountains of the Southwest.

In the 1980s, Morea emerged in Colorado. He became involved in Native American life and during this period, Morea began to paint again. Utilizing aerosol spray cans, the images he created are a continuation of those begun in New York two decades earlier.

The importance of Morea’s work is only now beginning to be realized. Over the last decade, he has emerged from his self-imposed exile to internationally lecture. Today, Ben Morea stresses an animist outlook on life, returning to his early preoccupation with the “primitive.” Simply swapping out the existing political structures is not enough. For Ben Morea, we must change the very foundations of our everyday lives by returning to a spiritual connection with the art.