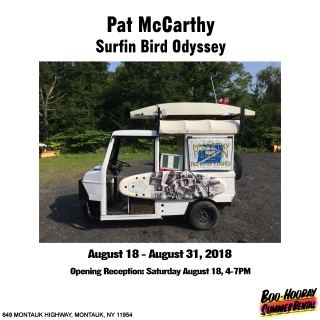 Surfin Bird Odyssey celebrates the landscapes of Long Island by air, sea, and land, as Pat McCarthy journeys east to Montauk alongside his family of racing pigeons in their motorized Cushman Tuk-tuk, with surf boards on the roof. They're bent on getting out on the water, feeling the breeze, maybe standing up, and taking flight. Homing Pigeons are born to fly, far and fast, and this family of birds is eager to have the pleasure of touring Long Island from above, all 120 miles back to Brooklyn.
The gallery will exhibit sculpture born of McCarthy's hyper sensitive approach to raising pigeons and maintaining their rooftop village. The new works are poetic assemblages combining ceramics, blacksmithing, wood carving, book binding, motorcycle engine repair, architecture, and of course ship-wrighting and surfing. The works reveal a method of making art as a constant navigation through nature, a search for the extremes in the every day, incessantly asking: don't you know about the bird?