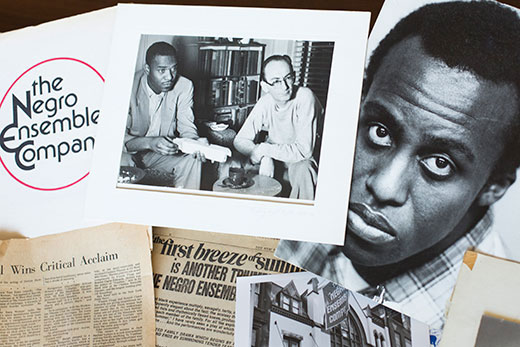 Douglas Turner Ward (b. 1930) is an actor and playwright whose work has been integral to shaping the story of black theater in the United States. Along with Robert Hooks and Gerald S. Krone, Ward founded the Negro Ensemble Company in 1967, of which the founding principle was black theater for black audiences by black artists.

The Douglas Turner Ward Archive is the most comprehensive collection ever assembled related both to his work and the activities of the Negro Ensemble Company. The archive helps to illustrate the growth of black theater in the United States, elucidating the struggles for rights and representation for African Americans in the last half century. The archive includes the annotations, revisions, and correspondence of some titans of theater, film, and television, as well as African-American artists, educators, and activists.

The Douglas Turner Ward Archive notably contains correspondence with the poet and writer Amiri Baraka, the ground-breaking educator Jeanne Noble who wrote to Ward in response to his 1966 New York Times article, ‘American Theatre: For Whites Only?’ and a signed letter from Eva Jessye who started a chorus during the Harlem Renaissance and became the first internationally-renowned black female choral conductor, offering her experience to the Negro Ensemble Company.

Included in this collection are copies numerous scripts written by Ward and annotated in his hand, notably Happy Ending/Day of Absence. Additionally, the Archive includes Douglas Turner Ward’s copy of A Raisin in the Sun, dated June 16, 1960, during which he met Robert Hooks, sparking a historic relationship.

The Archive includes annotated copies of his first play, Song of the Lusitanian Bogey and scripts from notable productions such as The River Niger and A Soldier’s Play which won the Pulitzer Prize as well the Critics Circle Best Play Award In 1981. A Soldier’s Play was also adapted to become a movie entitled A Soldier’s Story and was nominated for several Academy Awards.