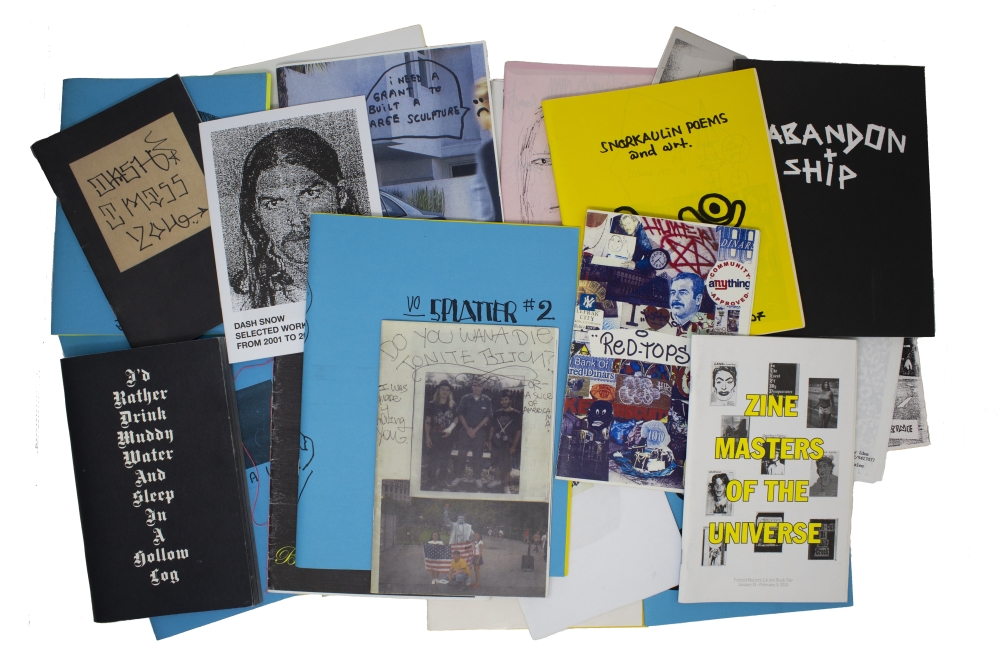 Punk zines, art zines, sex zines, and movie zines started snowballing in popularity during the 1980s. The late 1980s saw the publication of Factsheet Five, functioning solely as a pre- internet sourcebook for zines. In New York, on 7th Street in the East Village, the shop See Hear sold fanzines exclusively. By the early 1990s, within the milieu of Larry Clark’s Kids, zines mushroomed again, punk- style, but quickly became an outlet for the young and vibrant community of visual artists that grew out of the skateboarding community. Ryan McGinley, Dash Snow, Jason Dill, Patrick Griffin, Mark Gonzales, Harmony Korine, even the self-publishing veteran Larry Clark (Tulsa and Teenage Lust were self-published) all made zines, distributed peer-to-peer. The zines that came out of this community were mail-art not sent through the mail. Though the zine is subject to machine reproduction, it is nevertheless resolutely manual: collated by hand and viewed in the hand, the zine is made to hold and behold on one’s own time, in one’s own space.

A blurry dividing line might be drawn in the history of the zine, distinguishing subcultural zines of the last four decades, created by individuals in queer, punk, feminist, activist, and fan communities to share observations (often printed in editions of several hundred), and zines made by artists, who harness the format’s fast, cheap, and demotic nature, circulating tiny editions of ten or maybe fifty. The advent of the blogosphere in the ’90s began to whittle away at the number of zine titles: if the aim of some of these publications was to get a message out to a particular interest group, the online option seems to have prevailed for that directive, albeit at the cost of physical permanence. But the material structure of the zine has remained very much alive for artists, who continue to use the intimate format to distribute lo-fi artworks among friends or others quietly in the know. Zines provide an opportunity for artists to reveal their working methods in the product itself, and to control their work from conception to reception—an increasingly rare proposition in today’s art world, in which intermediaries often pave every step of the process.